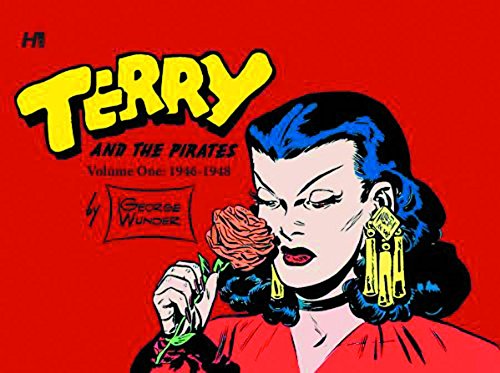 In 1946, without even seeing a single panel, hundreds of newspaper editors picked up Milton Caniff’s brand new comic strip Steve Canyon. The work of Mr. Caniff was legendary and editors knew that fans would, at the very least, want to see what he had come up with. Since its debut in 1934 the other strip he created, Terry and the Pirates, had been one of the most popular comic strips ever seen on a comic page.

Caniff was leaving the strip because he had a slight problem with the syndicate owning his work. When his contract for Terry came up for renewal, he decided to risk it all and create a second strip, one he would own a much bigger part of. Most artists would give their right arm for a hit like Terry, but Mr. Caniff was banking on the notion that he could make lighting strike twice.

All of this created a tremendous amount of pressure on whoever the Syndicate chose to follow Mr. Caniff on Terry. They had to keep true to his incredibly high standards or the strip would disappear.

They found their man in George Wunder. For 27 years after Caniff left the strip he kept the flag waving high. Terry and the Pirates The George Wunder Years; Volume 1 (1946-1948) documents his earliest years, the first few years when Mr. Wunder was still finding his own rhythm and feel for the strip.

Anyone could have spent slavish hours learning to copy Caniff’s style, but Mr. Wunder was no copy artist. One of the most notable features of Terry was the Caniff’s skill at drawing women, specifically a seductive femme fatale. Few who ever saw The Dragon Lady could debate the artist’s skill at creating an attractive villainess.

In the second daily of his career on Terry, Wunder introduced Ermine Toy. Her first close up was in the last panel of the second daily. He created a cigarette smoking woman in a shawl with a tantalizing curl of brunette hair slipping down the left side of her face.

The shape outlined her world-weary eyes and the arch of her eyebrows conveyed a slightly cynical nature as befitting a woman who was working in the shadows of the post-war Asia.

From this first week of dailies audiences could easily see that there would be no drop off in quality in their favorite strip. This did not mean that Mr. Wunder didn’t have his own style. There was a learning curve and as this new collection of his first years on the strip shows, he was not one to imitate Caniff.

Legendary comic historian Ron Goulart acknowledges this in his introduction. “. . . my initial reaction as I followed Wunder’s first couple of weeks was ‘Hell, he’s not Caniff.’ Over the years I’ve come to see that that Wunder was a gifted artist with a style all his own, an able storyteller . . .”

Which addresses a second and very important part of the equation: As a strip Terry wasn’t just about art, it was a densely plotted and character-driven narrative that often brought readers to the edge of their seats.

Writing a daily adventure strip is a difficult rhythm. Each day has to end on a solid note but still move the story forward. Storylines could go on for months, which kept fans returning to newspapers day after day to see what happened.

This new anthology begins with Mr. Wunder’s first story arc, “Trouble in Tibet.” Working as a charter pilot, Terry has to fly a client named Gunner Trek and his assistant, Ms. Toy, into a remote “. . . ice-bound rock pile.”

The first week was a strong opening that set up Mr. Wunder’s first Sunday page. Throughout the page he used multiple angles to reflect not only the action, but to give the reader a glimpse away from the dialogue and show them something hidden from Terry and his friend Charlie.

Like Caniff, Wunder took inspiration from film. He understood that a newspaper comic story had multiple angles and he demonstrated this perfectly in a Sunday page that was more narrative than action.

By the end of the second week it became clear that, while he had his own style, he was going to be able to keep the strip going in a manner that adhered to his predecessor’s work. The collection also holds two additional full storylines. March through September 1947 is taken up by “Oil Hostage Crisis.” This is followed by “Gun-running Frame-up” which ends in February 1948. We also see the return of the fabled Dragon Lady.

Hermes Press has used the best source possible for the reprints in this collection and fully explains any disparity in size or condition. They back up the volume with a good amount of original art from the period allowing the reader to make comparisons between the original and what saw print.

One the original creator leaves a strip it becomes known in the industry as a “legacy” strip. There are those who use the derogatory term “zombie” in reference to the idea that the strip is dead due to its creator’s absence.

George Wunder’s work on Terry proves that idea wrong. He created solid, strong storylines to keep the adventure flying and as this collection shows, he had a distinctive touch that was respectful to the legacy and history of the strip.

Caniff followed what Wunder was doing on the strip, and over time the two became friends. Mr. Goulart’s intro documents the artist’s very real understanding of the pressure that Wunder faced. If Caniff was pleased with his successor, fans should have no problem with what they find in this new collection.