Temple Grandin: How the Girl Who Loved Cows Embraced Autism and Changed the World 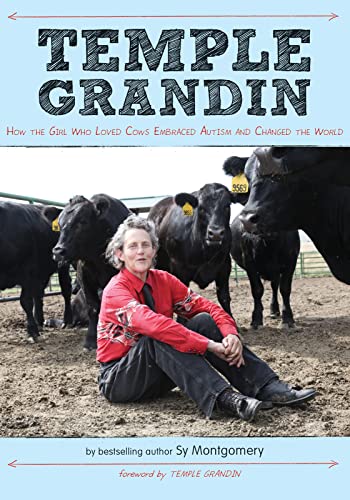 “In the end the message of Temple Grandin: How the Girl Who Loved Cows Embraced Autism and Changed the World is one of acceptance and inclusion, using autism awareness and education as the vehicles to achieve this aim. Bravo!”

Temple Grandin was always different. From her infancy her parents knew she was a child unlike any other; her father believed her to be mentally deficient but her mother knew that somewhere under Temple’s erratic and odd behaviors lived a child filled with curiosity, talent, and a huge capacity to love.

Temple developed slower than other children and did not speak until the age of five, but once she did, she showed a personality and wit that stood out among the crowd of typical children.

Nonetheless, she often found comfort in twirling for hours on end; and her senses were often extremely sensitive to touch, sound, and light. But Temple’s mother knew her daughter to be different, not less. The name eventually given to Temple’s condition was autism.

Autism caused Temple to struggle through elementary and middle school, at times subject to bullying and teasing, but as she got older she learned to make her way in the world. While navigating through society Temple found that not only did she have amazing talents but she also could do things no one else was capable of. She found that at times autism was a gift that allowed her to think in ways others could not: Temple thought in pictures instead of words and this allowed her to visualize things in a very special way.

For instance, Temple had the ability to think the way an animal could since she was so attuned to their senses and behavior. She especially loved and felt a kinship with cows. This ability led to her career in animal husbandry and her deep love of cattle turned into a talent unlike any other.

Today Temple Grandin is one of the most prominent figures in the meat packing industry where she designs humane treatment systems for all types of livestock. At this time in history Temple has done more for creating humane conditions for “food animals” than any other living human being.

Through her role as an ambassador for the humane treatment of livestock and her role as an advocate for those with autism, Temple provides a dual voice to those who might not otherwise have one. She is also renowned for her ability to explain the differences in her brain from those of most other people as well as how autism feels.

Within this new biography children are given a very personal account of Temple and her life. Pictures, drawings, and other media only bring readers further into Temple’s world.

Additionally the book chooses to address both children with and without autism, making it inclusive and educational at the same time. While showing the challenges that Temple faced readers can actually see the aspects of autism that can have a negative affect on an individual on the autism spectrum. However at the same time the reader is also shown those special abilities that can make an autistic individual exceptional.

Sy Montgomery also does a spectacular job of writing for a middle-grade audience, at one point even making a Harry Potter reference to explain an individual like Temple living with autism. Harry’s abilities might have seemed a bit scary to muggles, but once he was accepted into Hogwarts and given a chance to be a part of things, he blossomed—as would children with autism if they were accepted and treated as equals.

In the end the message of Temple Grandin: How the Girl Who Loved Cows Embraced Autism and Changed the World is one of acceptance and inclusion, using autism awareness and education as the vehicles to achieve this aim. Bravo!