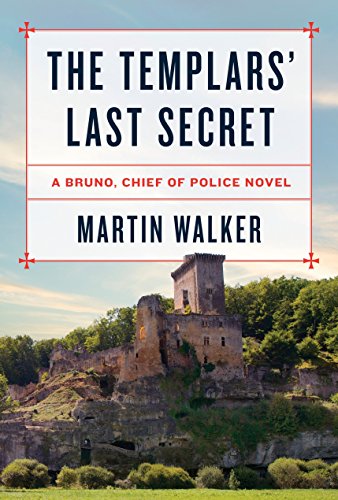 “combines the intrigue of an archaeological event and the joy of an upcoming wedding with  the machinations of a political thriller . . .”

Bruno, chief of police of St. Denis in the Dordogne, has a busy day ahead, and he’s not yet aware of most of it.

Aside from his usual morning jog with his dog Balzac, he’s commiserating with his friend Chief Detective Jalipeau over the problems with accusations of child abuse at a church-run facility. He’s also making last minute preparations for the best man’s speech at the wedding of archaeologists, Horst and Clothilde, who have had “the longest running courtship in history,” as well as preparing their pre-wedding dinner.

In the meantime, he’s nursing a fractured heart because Isabelle, the love of his life, recently took a job with the Ministry of Interior and is now in Paris coordinating antiterrorist efforts.

As if he doesn’t have enough on his plate, another complication appears in the form of Amélie Plessis, assigned by the Ministry of Justice to monitor his work for two weeks. Very Internet savvy, Amélie’s easy access to Facebook, Instagram, and other social media soon make her an integral part of Bruno’s investigation team.

In the midst of all this, he’s called to Castle Cammarque, where a woman has fallen to her death.

Though it initially appears the woman died while spray painting graffiti on the castle wall, more investigation reveals someone was with her and in all probability she was pushed.

In the way these things come about, what seems an accidental death becomes more complicated as political overtones enter the picture.  The deceased woman is an Israeli, engaged to a Palestinian. Both she and her fiancé are acquainted with several people either living in the area or involved with the current dig at the castle, a place long reputed to be associated with the Knight Templars.

When the word she leaves behind on the wall—“IFTI”—is discovered to refer to the Testament of Iftikhar, a controversial and legendary manuscript supposedly given to the Templars, proving Jerusalem is of no significance to Islam, Bruno is told “There are some tricky and political issues attached to all this.”

Soon the Testament is linked to a terrorist plot in St. Denis, but who or what is the target? Is it the International Boy Scout meeting, including Muslim and Israeli scouts, the opening of the current exhibition of Lascaux cave art, or something to do with the ongoing excavation of a tomb discovered at the castle, where a documentary crew is filming the progress?

Could it, by some wild stretch of the imagination, be all three?

Though complicated because of the many plot threads involved, this novel is in no way confusing and is entertaining for those same reasons as every wisp of subplot is drawn together.

With its history of the Lascaux caves and as well as the association of the Templars with Cammarque, this story set in la France profund, the heart of the countryside where Bruno lives, is definitely an incitement to visit the region and see these places firsthand. The detailed workings of the French police department as well as that of the gendarmes and other branches, will be enlightening to those unfamiliar with the systéme de justice Français and how it differs from that in the U.S.

Though there are quite a few characters in the story, all are so deftly delineated they are easy to track. From Fauquet’s café to the riding academy, one never knows which minor entrant having a mere “walk-on” will later become important to the plot.

All in all, The Templars’ Last Secret is an enjoyable and absorbing tale that combines the intrigue of an archaeological event and the joy of an upcoming wedding with the machinations of a political thriller. Martin Walker’s harried but likable chief of police is an endearing character and those fortunate enough to read this novel will undoubtedly search for other Bruno stories.