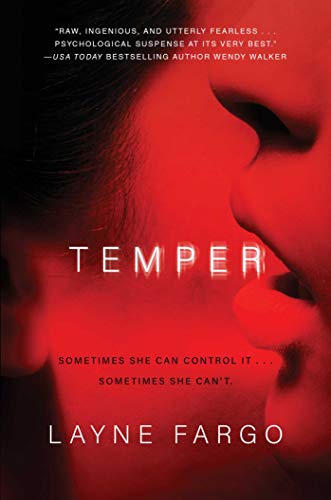 “Temper is one hell of a ride. Fargo’s writing is direct and crisp, and her characters mesmerize. She keeps the story moving and the intrigue high with fresh twists on those classic thriller genre crowd-pleasers: sex, violence, and deception.”

Acting is a game of deception; a fiction that creates humans more authentic than reality. They fight and they bleed, they love and they die, for reasons that only shine under a spotlight. In Temper, the debut novel by Layne Fargo, there is no telling where the acting ends and reality begins.

Everything about this psychological thriller screams immediacy; the chapters are quick, the voices are present tense, and the timely plot unfolds in a single propulsive timeline as told by two women. Joanna is the executive director of Indifferent Honest, a small but prestigious Chicago theater. Kira is an actress who’s hit 30 and still chasing her big break. Both women are unapologetically ambitious, and the book’s structure and point of view masterfully feeds into their desires. They want power and recognition, and they want it now.

The character connecting these two women is Malcolm Mercer. A consummate actor, Malcom is the other half of Indifferent Honest. He stars in the theater’s every production while Joanna handles the business end of their business. When Kira lands the female lead in their upcoming production of a play called Temper, she becomes Malcolm’s sole costar.

Malcolm, who functions less as a character than an emblem of charismatic patriarchy, begins a series of mind games to mold Kira into giving the performance he wants from her. He casts a thrall, and not just over his costar. This is Malcolm’s M.O. for every person in his life. Joanna, who has been both a victim of and complicit in his manipulations for years, is slowly breaking out of the thrall. Kira is falling under the spell, but tapping into the actress’s darker emotions blurs the line between illusion and reality.

“Soon I’ve lost track of where my simulated rage stops and my actual anger begins. But it doesn’t matter, because with each line I’m gaining strength, shaking off his grip.”

As the title suggests, much of this book is dedicated to anger and what happens when that anger is unleashed. In theater, stage violence is carefully choreographed to ensure the safety of everyone on the stage and, despite how it appears to an audience, the victim is the one in control of the scene. It’s a complete inversion of power.

Kira’s character in the play acts out a series of reveries, sequences of dream violence against her husband, played by Malcolm. But when does the illusion of violence become reality? When does it move from reaction to intention? These questions echo throughout the play and the book, making the reader question who truly holds the power and whether anyone in this world is safe.

Both Joanna and Kira struggle throughout the book with classic patriarchal issues. They crave Malcolm’s approval, they’re each performing—in their own way—for a male gaze, which pits them against each other in false conflict, yet they inherently surpass and rise above the roles in which they’ve been typecast. Joanna states this outright at one point. “He has no idea. Who I am. What I deserve.”

Despite both women’s fixation on Malcolm, it’s their dynamic with each other that really compels. Just like everything else in this illusory world, their relationship is a series of Russian dolls, slipping from mask to mask until their cores are finally revealed in a stunning and perfect ending that will have readers talking for days.

Temper is one hell of a ride. Fargo’s writing is direct and crisp, and her characters mesmerize. She keeps the story moving and the intrigue high with fresh twists on those classic thriller genre crowd-pleasers: sex, violence, and deception. Readers won’t find better in the debut thriller category this summer.

Mindy Meija's most recent novel is Leave No Trace (Atria, 2018), nominated for the 2019 Barry Award for Best Novel and a finalist for a Minnesota Book Award.