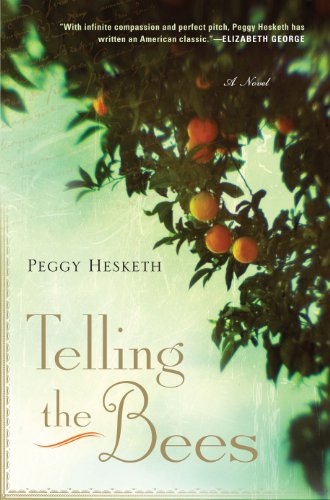 Peggy Hesketh’s debut novel Telling the Bees is a tender portrait of Albert Honig, a lifelong beekeeper and elderly bachelor. Each chapter begins with a detailed and fascinating bee fact and goes on to detail Albert’s various meditations on bees, philosophy, and human nature.

The novel begins with the tragic murder of Albert’s elderly neighbors, Hilda and Claire Straussman—both sisters who never married—and ends with their murders finally and fully solved. This isn’t a mystery novel, so much as a quiet love story between Albert and Claire and Albert and his bees written in skillful prose.

Front and center of this novel is a universal quandary: Why can we forgive in death what we cannot forgive in life? Albert Honig is estranged from the Straussman sisters for 11 full years before their murders. Yet it is only when Claire and Hilda die that griefstricken Albert regrets the estrangement and wishes they had reconciled. He especially wishes he had reconnected with Claire, a woman he ineffectively loved in secret since boyhood. Indeed, Albert’s inaction is one of the major flaws of this novel.

Albert Honig is an unlikeable character, which would be fine, even welcome, if he took action and proved more interesting. Because the entire book is dedicated to Albert’s Puritan and loquacious narration of the past, there’s the sense of little at stake in the now of the novel and little if any tension throughout.

There’s also little sense of a larger context to Albert and his world, making the novel feel contrived: for most of the novel Albert Honig only appears on stage whenever crime investigator, Detective Grayson, questions him about the Straussman sisters’ murders, as though between these meetings Albert is merely waiting in the wings, inert until called to life to narrate the history of the Straussman family, whereupon he’s all talk and no action.

The final chapters are interesting and emotionally charged. Albert Honig, now in his 80s, meditates on his death and the death of his beehives. The answer to the central quandary—Why can we forgive in death what we cannot forgive in life?—is perhaps that we deny our mortality. We hold onto our pain and anger and refuse to forgive because we insist on discounting death and in believing that there will always be time to reconcile with ourselves and with others.

Albert Honig’s growth in this novel, such as it is, seems to be that he confronts mortality and edges toward recognition of the waste of lives that are little lived, his own included.