To Tell You the Truth: A Novel 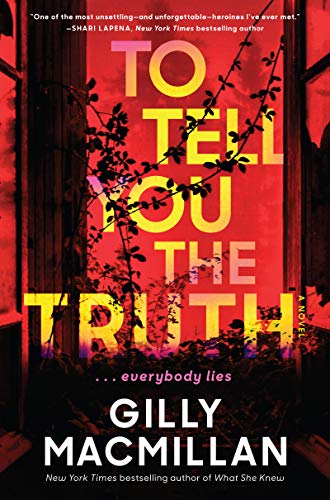 “From the beginning we know we’re dealing with the kind of unreliable narrator who’s voiced so many of the early 21st century’s bestsellers.”

If you studied creative writing you probably met a few of those “what if?” dreamers who spent a lot of time talking about the amazing books they wanted to write . . . stories that tapped into breaking news headlines and blended multiple genres and wove in all kinds of fantastical yet disparate ideas that never actually came together.

If so, here’s how you’d imagine one of them describing things that happen in Gilly Macmillan’s To Tell You the Truth.

“What if . . . a woman has been haunted her whole life over the disappearance of her little brother, who might have died because of something she did . . . a woman who’s a bestselling author . . . who writes a book her agent and publisher hate because it kills off a much-loved character . . . and who has an imaginary friend who might make her do bad things . . . and a husband who’s jealous of her career . . . and, oh, a fixation with strangers who hold mysterious dance parties in the woods during the summer solstice?”

Rolling your eyes at that description is understandable. Walking away without reading the book is a terrible mistake—foolhardy based on Macmillan’s track record and a tremendous lost opportunity given the mesmerizing tale she tells: a story that somehow blends the intrigue of a domestic thriller with the perennial draw of a missing child and a dip into the uncanny, all unveiled at a breakneck pace.

Macmillan does all of that with this novel, which demands to be read in one or two sittings. It’s shorter than many of this year’s top thrillers yet packed with more twists than most writers could even imagine putting into one book.

From the beginning we know we’re dealing with the kind of unreliable narrator who’s voiced so many of the early 21st century’s bestsellers. Her name—changed as an adult to hide her from her past—is Lucy Harper, and she springs to life as someone with a slightly unsteady mind right after a prologue that portends the dreamy underpinnings of the story that follows.

If you’re a writer you’ll probably relate to certain personality quirks Lucy exhibits right away. If you’re an avid reader of mysteries her character will fulfill some of your sneakier suspicions about authors who truly do live in worlds of their own creation. Either way, based on that prologue, you’ll be primed for the worst that could happen when her husband Dan goes missing.

Thanks to some bitingly effective dialogue that zeroes right in on the Dan’s character, you might hope he never comes back. Based on the suspicious activities of Lucy and Dan’s neighbors, you’ll find plenty of suspects who may be complicit and some of the truly awful things he’s done. And if you distrust Lucy based on her past and the surreal visions she suffers thanks to the invisible friend-who-might-not-really-be-a-friend, you might even put your money on a final scene that sends her away in either handcuffs or a straightjacket.

No matter what, there are two key reasons you’ll probably come to believe all of the seemingly unbelievable happenings in this book: perfectly drawn characters who do surprising but completely plausible things, and terse yet illustrative writing that draws a laser-like focus to every single page.

Yes, there are twists and more twists, yet none that feel like they’ve been engineered simply because readers need twists. They’re there because they ultimately make perfect sense, and compelling because they’re genuinely surprising. To tell you the truth, Macmillan might say, she was determined to take you on a journey filled with all kinds of crazy things jumping out of the dark but knew exactly what she was doing every step of the way.