Tell Me What You Want: The Science of Sexual Desire and How It Can Help You Improve Your Sex Life 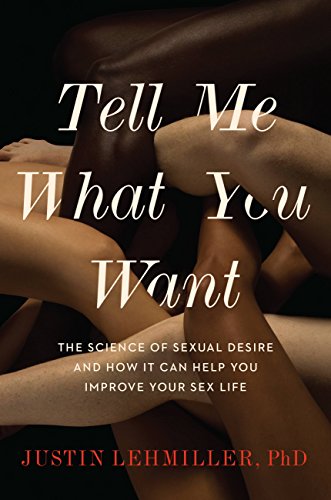 “Sexual fantasies are highly self–absorbing. . . . We script both sides of the dialogue as well as the plot, making fantasy soothe precisely because things always turn out well.”

Fantasy is greatly underrated, too often dismissed as pointless daydreaming or a waste of time. Yet sexual fantasies are highly self–absorbing. We start out thinking about someone else but end up engrossed by our central role in the imagined affair: What we say, how we act, how the other responds. We script both sides of the dialogue as well as the plot, making fantasy soothing precisely because things always turn out well. Paying attention to where the imagination leads can also give us a fix on where, emotionally speaking, we want to go.

In Tell Me What You Want: The Science of Sexual Desire and How It Can Help Improve Your Sex Life, Dr. Justin Lehmiller, a research fellow at Indiana University’s Kinsey Institute, aims to shed light on sexual fantasies—who has them, how common they are, and the psychological purpose they serve. While Alfred Kinsey famously wrote about people’s sexual behavior in the 1940s and 50s, he failed to ask about their desires.

The main difference between men and women “is really in the frequency in which they have a given type of fantasy.” Women imagine more same-sex scenarios. They value settings more than men do, and their fantasies have more emotional shading.

The author arrived at his findings by surveying more than 4,000 volunteers. This methodology unfortunately makes his sample nonrepresentative, although the approach is understandable given how reluctant people still are to talk frankly about sex. Another drawback to the survey approach is that readers confront repetitive laundry lists and variations of activities taken from the questionnaires.

After a painful rejection or loss of a relationship, for example, fantasy can be the first sign of an emotional thaw, a signal that we are ready for someone who is genuinely available. Behind every fantasy lies a kernel of frustration and thus an impetus to change.

In addition to fantasies about an ideal beloved, we also harbor fantasies about romance itself. We ask it to satisfy longings for attachment, dependency, sex, and companionship. Perhaps fantasy's most compelling power is to create an atmosphere of hope, even in seemingly impossible situations, and give us the strength to endure.

The simplest fantasy can be a straightforward wish or a consolation for what we lack. It can undo old wounds. The author contends that most sexual disorders have a psychological cause rather than a physical one. We don’t need Viagra and the like because they’re not going to “change the underlying issues—like shame, insecurity, and poor communication.” Express yourself rather than repress yourself, may as well be his mantra.

The book includes a 15–question quiz intended to reveal your secret desires. It concludes with icebreakers, tips on how to start a conversation about sexual desires, and ways to turn your fantasy into reality.