Tears of the Mountain 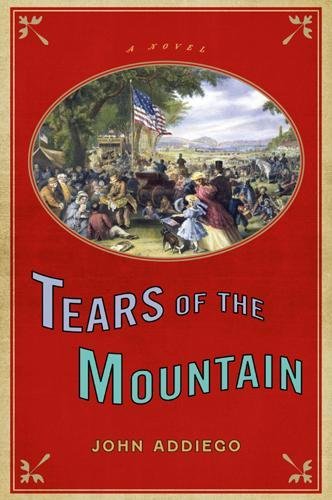 Tears of the Mountain follows Jeremiah McKinley as he negotiates the Centennial Independence Day, July 4, 1876. Through the course of this day we meet a range of characters, both good and bad; are witnesses to murder most foul and mysterious; and are privy to McKinley’s memories of traveling west as a boy and of settling in Sonoma, Northern California.

John Addiego has had numerous short stories and poems published in literary journals. He is the former editor of The North West Review and has published one previous novel, The Islands of Divine Music. While he was brought up in the San Francisco Bay Area, he now lives with his wife and daughter in Corvallis, Oregon, where he teaches children with special needs. He is currently working on his third novel for Unbridled Books.

This is a good work of historical fiction based loosely on real events and people. In it we are given a clear indication of some of the trials and tribulations experienced by the pioneers that sought to begin a new live on the west coast. There are interactions with native American Indians, both positive and negative; foul weather; mutiny; death; loss; and wonderment at the magnificence of this new land.

The narrative unfolds in an interesting way. The chapters alternate between the present, Centenary Day, and the past. As a result, all the odd numbered chapters deal with Jeremiah McKinley’s present, and all the even numbered chapters follow his travels from the east coast to the west and his subsequent life leading up to the present day.

Unfortunately, the novel as a whole is let down somewhat by the predictability of the mystery plot. In the present day narrative a U.S. Senator is found murdered and a search for the culprit ensues. This plot begins well but ultimately it is not too difficult to figure out who the killer is. It seems as though the murder mystery is no more than a hook to hang the very good historical writing upon.

While the central character is McKinley, there are a number of active voices in the narrative. Addiego shows skill in developing varied yet realistic voices for his characters. As you would imagine in the newly settled west in the mid 19th century, there are people from a variety of environments and socio-economic backgrounds. The author presents these differences well and the narrative is the better for it. Although some may feel that the tone of the novel is overblown and flowery, it is just this use of language that draws the reader into the times and the story.

There are also some contemporary references that help support the historical narrative. There is a clear filmic allusion in the way the author links chapters, it is almost as if there is a fade out from one era to the next:

And he wondered if the old cynic had ever truly felt the pull of such a woman’s love, the heart’s compass drawing him always back to her

whose freckled cheeks and sky –

all of a sudden like some gleaming bluebird’s wings as he made his way through the green seas, parting the fibrous waves with his arms like a swimmer, and his heart would pound in his chest.

The transition from one chapter, one time, to the next is almost seamless. This device closely links the quite disparate elements of the novel into one unified whole. It is a clever technique, and John Addiego uses it well.

There is much to like about Tears of the Mountain and some great technical skill displayed in its execution. Notwithstanding the predictable conclusion to the murder mystery, this is a satisfying read on many levels. The whodunit plot provides an adequate vehicle for the very good historical content, which is clearly Addiego’s strong suit; there is compelling subtextual commentary about the place of religion, political affiliation, racism, and gender bias in society; and there are some passages of wonderful descriptive prose.

There is something for most readers in this novel. It is a job well done.

Reviewer Phil Constable is a technical writer, document designer, and editor who has written on such authors as John Fowles, Graham Swift, William Golding, Graham Greene, and Kazuo Ishiguro.