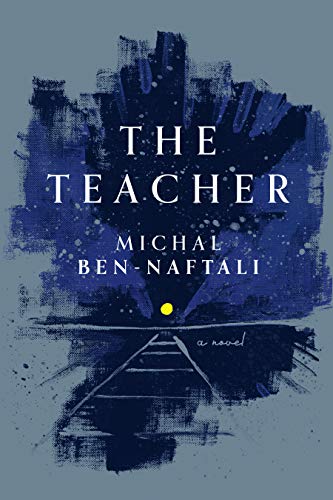 “a shattering portrayal of utter loneliness, guilt, and despair.”

The opening sentence of The Teacher is as stark and unsentimental as its eponymous protagonist, Elsa Weiss: “The sidewalk was cleansed of the blood.”

That blood belongs to Elsa, a Holocaust survivor and high school English teacher in Tel Aviv who committed suicide in 1982 by jumping “from her rooftop apartment in one of the few still-intact buildings” in her neighborhood.

Now, 30 years after that event, the unnamed narrator of the novel, who was one of Elsa’s students from 1978 to 1981, is trying to understand what drove her former teacher to such desperation. Because Elsa confided in no friends or family and left behind no notes and only a single passport photo, the narrator admits that it’s impossible to conduct a traditional investigation into the facts. Nor does she try.

Instead, she has decided to relate “what might have happened, or rather, what should have happened and most likely did happen to the one who went to the point of no return.” In short, the entire book may be a lie.

This subjective approach gives author Michal Ben-Naftali—an award-winning Israeli novelist, essayist, and translator—the freedom to dig deep into the psychological and emotional truth of a survivor like Elsa. What emerges, powerfully translated by Daniella Zamir, is a shattering portrayal of utter loneliness, guilt, and despair.

Even after Hitler is defeated, the narrator imagines Elsa pondering, “what did that mean, the war had ended? . . . She realized that in fact she had stopped feeling . . . she no longer desired to sink her teeth into a beloved dish, or a beloved person, or to hold onto a body or anything else out of devotion.”

Mixing the known facts and her own extrapolations, the narrator traces Elsa’s story back to her middle-class childhood in Rumania, a prewar year studying in Paris, and a lukewarm marriage to Eric Weiss, a handsome Zionist neighbor whom she met “through a high-school friend the summer of graduation.”

As conditions in the Jewish ghetto grow ever more dire, Elsa’s family learns about a Hungarian journalist named Rudolf Kastner who hopes to rescue a number of his fellow Jews by bribing German officials to let them pass into Switzerland and from there possibly to Israel. (Kastner, an actual historical figure, would ultimately usher nearly 1,700 Jews to safety, but his method of selecting those lucky survivors made him a controversial hero.) Elsa reluctantly boards this rescue train, along with Eric, leaving her parents behind.

The route to survival, however, runs via cattle cars and the notorious Bergen-Belsen concentration camp, where the Switzerland-bound refugees get slightly special treatment, such as a few ounces more bread per week than the rest of the prisoners.

In addition to probing Elsa’s state of mind, Ben-Naftali also grounds her story in vivid descriptions of the reality of the train and the camp. “There was no choice but to eat what she was given,” Elsa thinks, “to hold her nose to get over the sour smell of the beets and the urine and the rot and not notice what she was shoveling into her mouth, to swallow in moderation, just to get something into her stomach.”

Interestingly, the opening sections of The Teacher are told mainly in the first-person plural, a chorus that effectively shows how the entire high school student body viewed Elsa. Gradually, the narrator asserts her “I,” separating herself from her classmates.

At just 138 pages, the novel is short. As long as the narrator is inventing the whole thing anyway, it would have been nice to imagine more details about how Elsa managed her first few years in Israel—for instance, whether it was hard for her to learn Hebrew, or whether she felt any regret when her brother Jan, her only surviving relative, moved far away to Australia.

Even unsolved mysteries can leave a lot of clues.