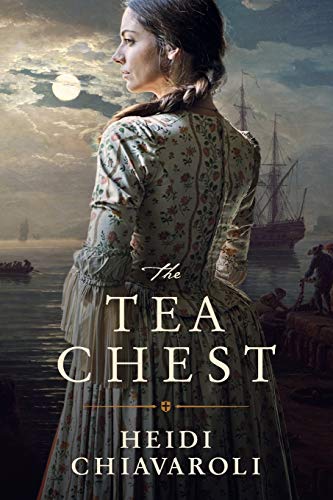 “Chiavaroli does a good job of tying up the various loose ends she has created. Suffice to say, and not to spoil the ending, when one reaches the end, one closes the book satisfied.”

Hayley Ashworth has had one goal for years: to be the first female SEAL in the U.S. Navy. She has made it as far as “Hell Week” that will determine her fate. But before she can do that there is an issue she must clear up. A visit with her mother. A mother whom she has not seen in six years, a mother who has always been a drug addict, a mother with whom she has no attachment. And now she has to resolve that matter.

This is where Heidi Chiavaroli’s new book, The Tea Chest starts. Chiavaroli takes the reader on a journey from California to Massachusetts where Hayley will attempt to reconcile with her mother, Lena, and while there discover answers to questions she didn’t even know were there to be asked.

Upon her arrival she finds herself in a position where she must save a drowning child, only to discover that the child is with the boyfriend, Ethan, she left six years ago without so much as a goodbye. She learns that although Ethan was once married, this is not Ethan’s child, but one he is caring for. As a sign of gratitude, Ethan invites Hayley to his business, an antiques shop, where he offers her anything in the shop as a sign of gratitude.

At this point, Chiavaroli introduces us to the other main character, Emma Malcolm. It is 1775, and she is a young woman from a wealthy Boston family, whose father is a king’s man at a time when patriots were rising for a fight. She is betrothed to the son of another wealthy loyalist family, Samuel, and Emma’s feelings move between loyalty to her father’s beliefs and a desire for her own freedom. To add to this confusion on her part, she becomes enamored of Noah Wilson, a young patriot who is also taken with her.

Here Chiavaroli takes her story from Emma to Hayley and back again.

Unsure of her feelings for Ethan, Hayley wants to leave the shop quickly and selects an antique tea chest. Back at her apartment, she drops the chest and discovers a hidden compartment where she finds an old document titled Oath of Secrecy on which are written the names of about 80 individuals. Hayley calls Ethan and tells him of the discovery, and here the story takes off.

The Hayley story becomes one of searching for the true history of the tea chest and its contents, with Ethan by her side and their relationship taking on a new turn, and her further search for her mother, who seems to have disappeared, much to Hayley’s disappointment.

For her part, Emma abandons her family, her abusive father, the womanizer she is betrothed to, and takes refuge at the home of patriotic family, the Fultons. It is at this time that John Fulton and Noah Wilson take part in the Boston Tea Party, and late one evening after the event, Emma discovers the Oath of Secrecy that many patriots had signed. Through a chain of events, Samuel discovers Emma and the oath, and threatens to expose the participants unless she returns to her father’s house and marries Samuel.

By this time, she has accepted Noah’s marriage proposal, but knows if she does not do what Samuel demands, these men will be arrested and charged with treason. She returns to her father’s home. As the patriots become more violent, Emma’s father is captured, tarred and feathered, and Samuel rapidly departs to avoid the same fate. Emma, having begged Samuel for help is left alone and discovers the oath.

Returning to the current day and Hayley, the reader follows Hayley and Ethan’s search for the truth. They discover that the chest is, indeed, a true relic of the Tea Party, but the veracity of the document remains unclear.

Their search through the Historical Society turns over a journal kept by one Emma (Malcolm) Wilson, and Hayley begins to learn more not only about the chest, but about the patriots’ fight for freedom from the tyranny set forth by the king and his loyalist followers.

Chiavaroli has done her homework regarding the revolution taking place at this time in American history, and she neatly weaves the true history with the fictional truths her characters live and discover. She ramps up tension as the fight takes place in Emma’s own backyard, while at the same time bringing home thoughts of Hayley’s personal fight with her own history.

As Hayley’s research continues, she discovers a connection to Emma as well as family she never knew existed through that relationship. When it comes time for Hayley to return to California for “Hell Week” she once again abandons Ethan to return to her life’s goal to become a SEAL.

Chiavaroli does a good job of tying up the various loose ends she has created. Suffice to say, and not to spoil the ending, when one reaches the end, one closes the book satisfied. The story and the characters remain in one’s mind for several days— The Tea Chest is, indeed, a satisfying story with a rewarding ending.