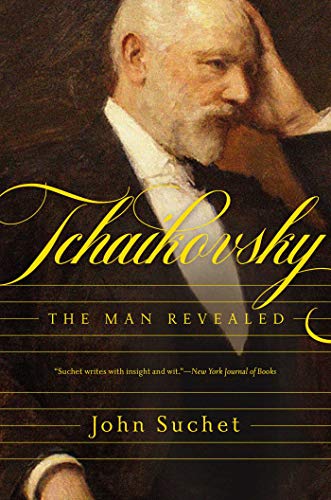 “Suchet brings journalistic objectivity, expert analysis, and sensitivity to his portrait of Tchaikovsky the man, his times, and his music.”

Pyotr Ilyich Tchaikovsky is the subject of British scholar John Suchet’s music biographies, the latest in his Man Revealed series that includes the heavyweights Beethoven, Mozart, and Verdi. In addition to being a prolific writer, Suchet is the host of Britain’s Classic FM broadcasts. Each book admirably has its own distinct style, and all are the result of comprehensive research.

His portrait of Tchaikovsky is condensed, richly detailed, and sifts through a lot of hazy information about the composer’s tumultuous private life. As much that is known about Russia’s most revered composer, just as much has been censored by Russian officials whose mission seems to erase his gay identity.

Suchet illuminates Tchaikovsky’s childhood years in which he formed lifelong bonds with his siblings. When he was forced to leave his mother to go to a music school it emotionally crushed him. His father wanted him to be a lawyer but eventually realized his potential as a musician and composer.

Tchaikovsky’s trajectory as a late-blooming pianist-composer was unstoppable even as his early career was initially under the controlling artistic standards of Arthur and Nikolay Rubinstein at the Russian Conservatories in St. Petersburg and Moscow. At various points, the Rubinsteins both humiliated Tchaikovsky and questioned his talents publicly. The prevailing critics also were harsh about Tchaikovsky’s early compositions. Sometimes the composer agreed, other times not, meanwhile the public was loving his work.

His success wasn’t paying all the bills though, so Tchaikovsky was on the faculty of the Moscow Conservatory, to secure a steady income. He was noted, among other things, to be less demanding of the male students than the female ones.  Creepy, to say the least, but what also must be considered is it was equally common for the heterosexual instructors to conduct affairs with their students as well. But on at least one occasion Tchaikovsky felt he was being blackmailed by Rubinstein into staying on as an instructor there, when Tchaikovsky was growing more famous and considered himself a full-time composer.

Suchet’s 2017 book on Giuseppe Verdi recounts the creative circumstances of most of Verdi’s operas; In contrast Suchet keeps those backstage stories to a minimum with Tchaikovsky, with essentially overview analysis covering the premieres of his symphonies and his opera masterpieces Eugene Onegin, The Queen of Spades, and iconic ballets Sleeping Beauty, Swan Lake, and The Nutcracker.

Tchaikovsky himself dealt with such initial failures. His Piano Concerto was eviscerated by Rubinstein, who within weeks, completely reversied his opinion and conducted its Moscow premiere himself. Tchaikovsky contended with many musical failures during his career, the most famous perhaps was The Bolshoi commissioned Swan Lake, a disaster at its premiere. Sadly Tchaikovsky was never to know that it became a defining ballet score masterpiece.

Suchet also brings up another issue that refracts previously unexplored biographical research about the composer, writing “Tchaikovsky’s sexual proclivities can make for uncomfortable reading in today’s world. Here I am not referring to his homosexuality, which was officially proscribed in his day and is a taboo subject in Russia even now. There is, however, no denying his predilection for youth. We know from his letters his sexual preference was for teenage boys before and after puberty.” To which he concludes that we would be mortified.

Then Suchet questions, “if this needs to be discussed when examining Tchaikovsky’s accomplishments as a composer, I would answer emphatically that it does.” And Suchet’s aim is to reach “the man behind the music” in every aspect.

Tchaikovsky was an emotional, passionate man and without doubt, his extended affairs with men informed his music, and his penchant for going to male bordellos were experiences that inspired him as a composer.

The composer and his brother Modest, also homosexual, both were copious letter writers, and they corresponded about their affairs with men and the public implications.

Among the Russian aristocracy, homosexual subcultures were not only tolerated but protected by the royal class. Outside of that context, to be publicly known as a homosexual risked social backlash and criminal penalties.

A victim of the mores of his era, Tchaikovsky was in a position to pursue his natural desire, but made to feel like an immoral hedonist. At times he was a self-loathing gay man, before that psychological dynamic was even defined, so he acted out in desperate ways to cope.

His fame exacerbated the situation to the point of desperation. He decided to marry Antonina Mullukova, a former music student. A disastrous unconsummated honeymoon sent the composer fleeing to one of his lovers. The wedding was exposed for the charade it was, but Antonia refused to consent to a divorce.

Meanwhile there was another woman in Tchaikovsky’s life, and Suchet is expert in detangling Tchaikovsky’s platonic relationship with his music patronage and of the mysterious distant lover Nadezhda von Meck.

Tchaikovsky tried to escape the scandalous gossip about his private life and the prying eyes of Russian authorities by traveling to other countries but would get homesick for Russia, his melancholia sometimes plunging him into work.

Suchet focuses on the interior dramas and passionate relationships that dominated Tchaikovsky life. Chief among them is his sexuality vis-à-vis the rabidly homophobic Russian society. As Russia’s most famous composer, he was under peerless scrutiny, with everything at stake, personally and professionally. Suchet brings journalistic objectivity, expert analysis, and sensitivity to his portrait of Tchaikovsky the man, his times, and his music.