Taxes, the Tea Party, and Those Revolting Rebels: A History in Comics of the American Revolution 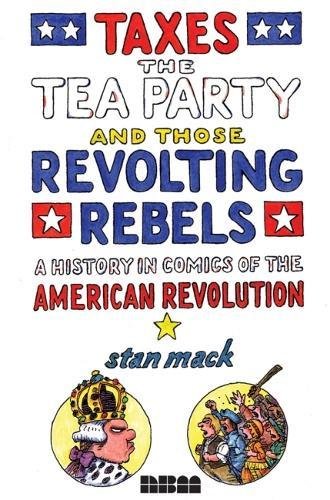 “. . . the one book needed to guide us all through the upcoming election year.”

This is the one book needed to guide us all through the upcoming election year. Without slipping into bombast or patriotic hyperbole, writer and illustrator Stan Mack has created a concise, honest, and very accurate portrait of who and what really built America.

Beginning with the year 1761 Mr. Mack takes time to set the scene for the arrival of the memorable date July 4, 1776. He creates a very real world filled with people just trying to get through each and every day.

That is the key of Mr. Mack’s success in this volume. Taxes, the Tea Party, and Those Revolting Rebels is about the people who populated the docks and the farms, and walked the streets filled with chickens, mud, horse dung, and rolling barrels.

There were the farmers had to come in from their land, dock workers who had to sacrifice their sons, craftspeople who had to supply a newly emerging army—as a result all became the kernel of America’s middle class. Each new member of the growing revolution is portrayed with as much respect and importance as the bigwigs of history.

America in the 1760s was filled with farmers and honest people, but it was also populated and financed by smugglers. These were maritime criminals who completely upset the British by not paying taxes as they should.

Let’s be honest about the British here: They were just trying to get some tax money from illegal shipping. After all, hadn’t they just defeated the French and made America safe? King George III had some serious bills! As well, the British felt they had already given the colonists a great deal.

As Mr. Mack reminds us, “Colonists, living under the British Monarch, had more legal rights that most people in the world. If not for those freedoms, they might never have been able to rebel at all.”

One note that we always seem to forget in any historical retelling of America’s beginning is the role class played in the narrative. Mr. Mack returns to remind us of this time and time again.

George Washington made some very wise decisions, least of which was his decision to limit the length of the presidential term.

But he was also a dyed-in-the-wool aristocrat who had a hard time understanding why people of lower classes, especially the soldiers who showed up to serve in his ranks, didn’t take their orders without blinking.

In another case, John Hancock wasn’t above doing what he could to protect his own criminal activities. After all, he had inherited his shipping business form his uncle. Who was himself a well known smuggler. . . .

While the foibles of our leaders and founders are on display, their heroism and the difficulties they faced are just as apparent. The pain experienced by Washington and his soldiers at Valley Forge is depicted realistically and believably. The author’s recreation of the sniping from other officers and the constant barrage of comments about incompetence endured by Washington adds a new dimension to a man whose name is often dumbed down to “patriotism.”

The effect of Tom Paine’s writing in his pamphlet Common Sense is incalculable. But Paine also failed to take steps to register his work so he could make money off of what he wrote. In addition, he was serving as an enlisted man when he wrote “These are the times that try men’s souls.”

The meaning of this famous sentence changes meaning as Mr. Mack chooses to show only a pair of feet bandaged in a snowstorm when he writes about that phrase. His choice as an artist opens up new meanings when the reader realizes Paine was writing on several levels at the same time he was leaving bloody footprints in the snow.

On the other side of the ocean, the faults and blindness of King George III to the real problems found in the colonies is made perfectly clear. But Mr. Mack balances the view by reminding us that most of the world lived under a monarchy at the time; hence, it was the norm; no one saw anything wrong with the system.

In order to see what was wrong with the system the rebels needed a salesman. And they got one with Sam Adams. Often forgotten when the other bigwigs get mentioned, Americans owe this wild man a lot more than we might care to admit. But because he was a wild man, all we gave him was his own beer . . . not his image on a bill or a coin to celebrate his hard work.

America’s own hypocrisy is never far from the forefront in Taxes, the Tea Party, and Those Revolting Rebels. The experience of women and African Americans at the time is recounted with honesty. Evidently, America’s failure to take care of and pay its soldiers when a war is over is hardly a new invention. None of this is swept under the rug.

The battles are outlined as well as the failures, such as America’s decision to invade Canada. Along the way single moments long forgotten from sixth-grade history jump out at the reader.

During combat in New York, George Washington has unwisely split his troops into two factions. Eventually they are trapped in Brooklyn Heights; but soon Washington finds a secret weapon in the hard-worn fishermen from Marblehead, Massachusetts. Through the course of a rain- and fog-filled night they ferry their fellow soldiers to freedom back in unoccupied Manhattan.

In a few quick panels Mr. Mack encapsulates the best of the American Revolution: People who don’t know each other acting together to save each other from a much bigger problem.

The line of Mr. Mack’s pen brings about the feel of a few of the experimental UPA cartoons from the fifties. The energy is found in vibration and noise seems to rise from both the unhurried and hurried manner of the characters. The emotion portrayed by the line perfectly matches the force and strength of the American Revolution.

Little if any “opinion” drifts into the story. By sticking to the facts Mr. Mack has created a book that can encourage an eighth grader to delve further into the subject while simultaneously enlightening a 60-year-old citizen who has long forgotten what it took America to become what it is.

It took all of us, not just some. All of us.