A Taste for Vengeance (Bruno, Chief of Police Series) 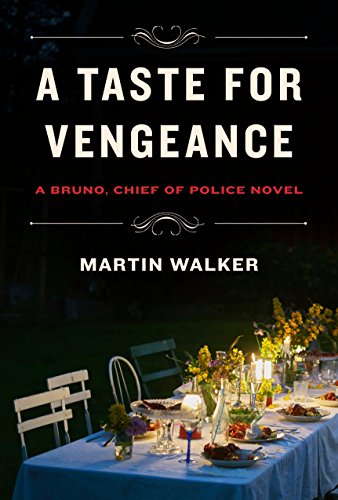 “Though these provincially-based stories aren’t true ‘culinary mysteries,’ the reader will have the vicarious delight of seeing a crime solved and becoming a gourmand in the process.”

Bruno Courréges, chief of police of St. Denis, fresh from the discovery of the Templar’s tomb in his last adventure is about to face a much more newsworthy and cruel crime.

Bruno’s friend Pamela has asked him to be on the lookout for one of the customers who signed up for her cooking class. The lady missed her train and hasn’t shown up. A short time later, the bodies of a man and woman are found in a farmhouse in Lalinde. To the investigators, it looks like a lovers’ murder-suicide, but soon, things don’t add up.

When it’s discovered that the woman is Pamela’s missing customer, an English citizen whose millionaire husband, Mike Felder, is currently dying in a cancer hospital in Houston, and the man’s identity is that of someone who died years earlier, Bruno knows he’s discovered a double murder.

Adding to the problem, though not part of it, Bruno has just learned that a member of the St. Denis women’s rugby team is pregnant. Bruno coaches the team and had high hopes that one of the scouts from the national rugby team would select Paulette to play for France. The girl won’t tell who the father is and refuses any help or sympathy. Neither will she tell anyone, including her parents, what she plans to do.

“I’m afraid I’m being selfish,” Bruno said with a sigh. “I’m sorry. I was so caught up in the hope that someone I coached might play for France. It’s a dream but it’s my dream, not Paulette’s.”

“Maybe what she really wants is to have a home, a man she loves, and to cook and raise children. There are a lot of women like that around here.”

Bruno puts Paulette’s problems aside and concentrates on his real work. When it’s discovered that the dead woman’s dying husband was once the director of British military intelligence, and the dead man, McBride, who admitted to once being a member of the IRA, is not only not a real Irishman, but his passport is in the name of a man long dead, the killings take on a political tinge.

“The passport isn’t fake,” J-J said. “It’s genuine but there’s no such person with the date and place of birth that McBride listed, and his original application has disappeared from the records.”

Bruno’s friend, Jack Crimson, had worked with the dying Felder, and now he’s whisked away to a safe house in England, for his own protection.

“The powers that be in London think I’ll be safer out of France. Even if I doubted their advice, I’d rather not take the risk or see anything happen to Miranda and the children.”

Learning the ropes of a new promotion, investigating the murders, and handling Paulette’s irate father, who receives anonymous information that Bruno’s the father of his daughter’s child, should’ve left the detective little room for anything else, yet he still finds time to ride his horse, Hector, exercise his lovable basset hound, Balzac, elude a persistent female journalist who sees the murders as a way of furthering her career, and whip up some tasty dishes to help out Pamela’s cooking school.

When the killers are discovered, it will turn out to be one of the most convoluted and vicious cases Bruno has solved, fueled by greed, jealousy, and selfishness on one side and long-running political hatred on the other, with money being the universal connector. In Paulette’s case, there will be a more intensive and delicate bit of detecting, and the identity of the father will be a shock to everyone, especially Bruno.

A Taste for Vengeance is another delightful and entertaining entry in the Bruno, Chief of Police Series, this time with the easy-going but efficient police chief acclimating himself to his new duties while dodging an eager-to-be-famous journalist. The twists and turns of the story brings the case to a surprising conclusion that neither Bruno nor the reader would ever suspect.

It may seem odd to find recipes for some delicious meals, such as step-by-step instructions on how to prepare pâté de foie gras, alongside a murder investigation, but that’s one of the charms of the Bruno series. A policeman can’t police 24 hours a day, after all. Though these provincially based stories aren’t true “culinary mysteries,” the reader will have the vicarious delight of seeing a crime solved and becoming a gourmand in the process.