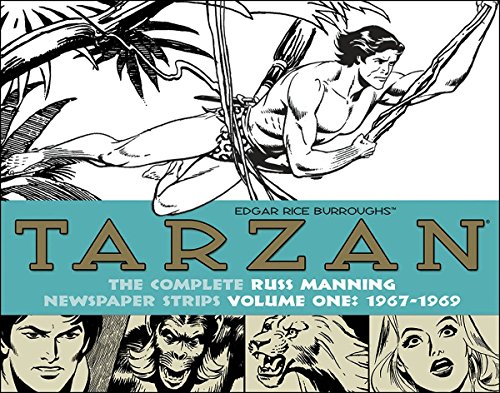 By 1967, the year that artist and writer Russ Manning took over the Tarzan daily newspaper strip, the character had been deeply entrenched in American and world culture for well over 50 years.

Through a succession of commercially successful film series as well as a massive presence in comics, novels and magazines as well as on TV, Tarzan had become one of the most popular characters in the world.

But that popularity and success came with a price. The series had drifted from the original Tarzan as first published by Edgar Rice Burroughs in the October 1912 issue of the magazine The All-Story.

The films were the main culprit. Wildly successful with plots and action that transcended the need for accurate translation, they had essentially ignored the nobility, complexity, and humanity of Tarzan as a character. To many he had been reduced to monosyllabic utterances or simplistic, partially constructed sentences such as the eternal cliché “Me Tarzan, You Jane.”

What Mr. Manning did on the Tarzan newspaper strip changed all that.

A lifelong fan of Mr. Burroughs’ work he gave newspaper readers a series of classic adventures filled with nonstop action that are even more exciting today than when they first appeared.

He brought Tarzan right back to his beginning, filling the stories with details straight from the world of Mr. Burroughs. He built on that strong mythology and by staying true to it, gave the Tarzan strip new life. To read these strips today is to be reminded of the best that an action strip can be. This is comic art at its finest.

A stunning artist with a deep respect for the newspaper strip work of those who preceded him (such as Hal Foster and Burne Hogarth), Mr. Manning was rebooting a franchise before Hollywood had any idea what that concept meant.

The very first daily Mr. Manning drew sets the tone for his subsequent work. Tarzan is seen moving quickly through the jungle vines. Parallel to the ground as he swings from one vine to another, he appears to be almost flying. His speed is apparent, as if he has no patience for what he has just left. Sleek and muscular, he seems to be in perfect harmony with the environment around him.

Inside a thought balloon Tarzan not only reveals his destination, but what he says also openly declares Mr. Manning’s intention to return the strip to it’s origins in Mr. Burroughs original works.

“Too long have I adventured in strange lands! It is time I returned to the best land of all—Home!”

In an era where the adventure strip was starting to fade as a genre in newspapers, Mr. Manning gave the series a sense of freshness and added an explosion of action. Fans and readers ate it up.

The artist’s ability to extend a battle sequence over weeks at a time is amazing. A sequence beginning December 18, 1967 starts with Jane being kidnapped by freakish, manlike apes.

Over the course of the next two and a half months Mr. Manning sustains a chase sequence that will leave anyone breathless. The pace is unrelenting and never stops. Filled with fist fights, secret rooms, duplicitous royalty, and a very brave Jane doing what she can to help her husband. Mr. Manning doesn’t let up until March 2, 1968 as Tarzan lays unconscious across a tree trunk in the middle of the river. It is a master course in how to perfectly pace a daily strip.

The daily storylines he creates are extended. The Sunday pages hold a separate continuity. As each one spreads out over roughly six months Mr. Manning builds on the complex world that Mr. Burroughs originally created all those years ago.

His first Sunday story brings Tarzan back to the Land of the Ant Men. This is a world created by Mr. Burroughs in one of the original novels. The last storyline focuses on Korak, Tarzan’s son. The decision to place an entire storyline on a secondary character reminds us of the importance that Mr. Manning placed on staying true to Mr. Burroughs original vision.

While working at Gold Key comics Mr. Manning had created a character that was loosely based on Tarzan, Magnus, Robot Fighter. By 1965 he had taken over the Tarzan comic book. Both Magnus and Tarzan were big sellers and the syndicate took notice. This led to the offer to take over the newspaper strip.

The Library of American Comics new collection of Mr. Manning’s initial run (1967–1969) on the Tarzan newspaper strip is as exciting an adventure strip as has ever existed. Mr. Manning’s Tarzan dailies and full color Sundays are a rich feast for both old and new fans of Burroughs’ work.

Opening the volume is a solid history of both Tarzan and Mr. Manning. There are plenty of scans of original art as well as a good number of images related to the life and career of Tarzan. The accompanying text written by Henry G. Franke, an editor for the literary organization The Burroughs Bibliophiles, is an insightful encapsulation of the world of Tarzan as well as Mr. Manning’s take on the character.

The deep shadows and clear lines found in Mr. Manning’s style come alive in this collection. The colors of the Sunday pages ring out and at times come as close to three dimensional as any strip that has ever appeared in a Sunday.

The Library of American Comics has once again given fans another magnificent volume in a reprint series that is becoming a national treasure. This is the best of an American art form and it deserves to be center stage.