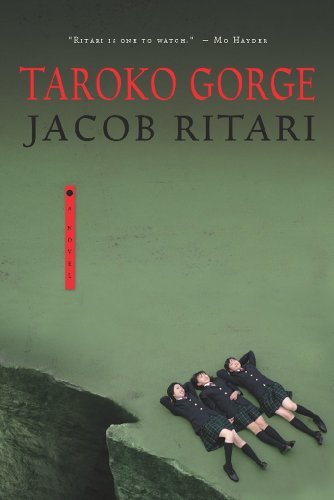 Taroko Gorge is Jacob’s debut novel. The setting is Taiwan’s National Park and the story is littered with a cast of international characters.

The mystery centers around three Japanese girls who go missing on a field trip to Toroko Gorge with their schoolmates. The narrative develops through the eyes of various characters as the search for the missing girls is hampered by a typhoon. In the course of the investigation, the searchers find out much about themselves and each other.

Taroko Gorge is a well-written and well-crafted story that will leave the reader spellbound and wondering what or who is involved in the girls’ disappearance. Was it the gorge itself that swallowed them up? Or is there a sinister human lurking about who had a hand in their disappearance?

As the typhoon hits the gorge, hope begins to dwindle in the minds of those who stayed behind to search and wait for the Taiwanese police. Will the girls ever be found at all—dead or alive? Mr. Ritari spent time studying with a Buddhist organization in Taiwan; he also immersed himself in the Japanese language and literature. This gives him a unique perspective into the culture and the setting. Interesting cultural and ethnic issues provide an undercurrent of tension between the teacher whose responsibility it was to care for the students, and the older Taiwanese detective investigating the case. The conflict and suspicions raised are believable and the tension seemed accurate, given the history between the two countries.

Robert Medak is a writer and editor.