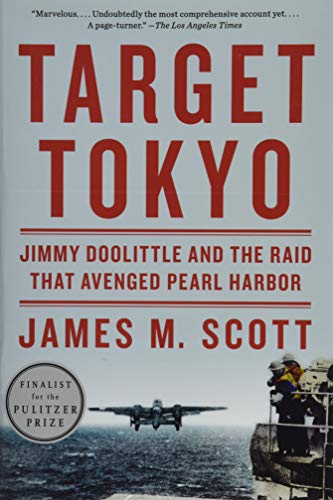 If there is a single military operation of retribution better known in the history of World War II than the so-called Doolittle Raid, one would be hard pressed to come up with an example. Despite the plethora of books (and many films, accurate and otherwise) previously published on the subject, it is always possible that an author or historian may encounter unknown and/or unused sources to further the public’s understanding of a historical event.

Given the many previous books on the mission, one naturally wonders if another is necessary. The answer to that question would be to read each publication and then compare and contrast to see for oneself inasmuch as each should tell the entire story behind the event.

As expected, this publication covers the story of the bombing raid from its genesis and planning following the attack on Pearl Harbor and America’s need to strike back as soon as possible, the training for it and the raid itself to the raiders’ escape from the Japanese, the horrific retaliation against those Chinese who assisted them or were suspected of doing so, and the immediate postwar story of the surviving raiders.

Among other threads included are the results of the war crimes trials of those Japanese military officers who participated in the “proceedings” leading to the execution of three of the participants and solitary confinement of others whose death sentences were commuted to life imprisonment, the story of the men who escaped internment from the Soviet Union, the brotherhood of the survivors and their postwar reunion toasts to their fallen comrades.

At present, Colonel Richard Cole, age 102 and leader Jimmy Doolittle’s co-pilot, is the sole surviving member of the raid. However, in the interim, the nation has made a point of honoring these men and their accomplishment from their immediate post-mission promotions and decorations to naming a highway interchange after the raiders in South Carolina and, just a few years ago, final recognition via award of the Congressional Gold Medal.

Not surprisingly, no summary of the mission is necessary here. What needs to be realized and recognized is the fact that despite the nation’s unpreparedness for war after Pearl Harbor and the concomitant shock following it, the country did have the resources, innovation and ingenuity to figure out how it could retaliate against the Japanese Empire in a manner which would just as easily shock its population and government as did the attack on Pearl Harbor to America.

The resources were the aircraft carriers the Japanese failed to destroy, the virtually new B-25 bombers and the men willing to volunteer for such a dangerous mission. The innovation and ingenuity came from the initiative which welded or mated the resources available to determine that an Army bomber could be launched off an aircraft carrier in a task force which had snuck up on Japan much the same as had happened in Hawaii by the Japanese.

Although the bombing results were underwhelming, it was enough to provide a serious boost in morale on the American home front and alter Japanese strategic thinking to the point of having a major influence on what became the pivotal Battle of Midway less than two months later.

This is a well-written and well-told story by author James M. Scott. However, there is one minor criticism which could be made along with one suggestion. Scott has employed an extensive bibliography and array of sources. Unfortunately, there are no traditional footnote citations in the text. The notes are linked to quotations and other terms and expressions on specific pages. This seems to be an ongoing trend in current historical writing.

The one suggestion involves the lack of inclusion of any maps to show the route taken by the task force across the Pacific, the approaches to the multiple cities targeted by the B-25s, their routes of egress across the East China Sea and the locations of their various crash sites in China or at sea and, in the case of one, the location of Vladivostok in the Soviet Union.

Otherwise, there is much here to appreciate even if it has been covered previously. Most Americans will probably never really fully comprehend the sacrifices and contribution made by Doolittle and his men in helping to turn the tide of war in the Pacific.