The Tao of Travel: Enlightenments from Lives on the Road 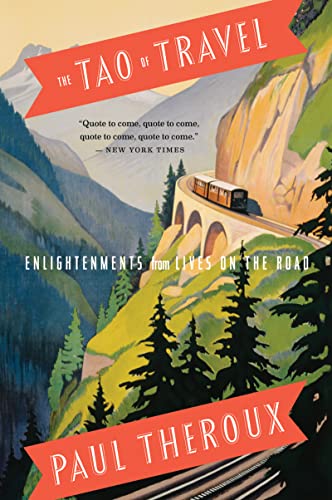 “If you’ve traveled enough to encounter dishes like the deep fried chicken anus, or simply want that Congolese Monkey Stew recipe, you’re going to want a copy of this book.”

Paul Theroux is arguably the finest living travel writer. He’s written brutally honest and often humorous accounts of paddling the Pacific, walking around Great Britain, and ridding the rails in Africa, South America, Europe, and Asia. While others in the genre sing the praises of Tuscany and Provence, Mr. Theroux has inspired his readers to go alone, pack light, and travel overland to places naysayers warn against visiting.

I picked up his first travel book, The Great Railway Bazaar, as a sophomore in college, 20 years ago, and have been infected with what Hans Christian Anderson once called “out sickness” ever since. Mr. Theroux may not be to blame for the fact that I’ve moved 17 times in the last 20 years, or that I’ve left good jobs for the allure of the road, but I picked up his new book, The Tao of Travel: Enlightenments from Lives on the Road expecting to learn more about the root causes of restlessness and how travel changes people, in some cases making them unsuitable for the mundane demands of sedentary modern life.

The Tao of Travel isn’t the deep examination of travelers’ motivations, or exploration of the consequences of travel that I’d hoped for, but it is nevertheless an engaging, insightful, and at times, funny reference book for independent travelers. The book is heavy on quotes, both from Mr. Theroux’s own work, and the works of other writers, including literary heavyweights like Robert Louis Stevenson, Evelyn Waugh, Mark Twain, John Steinbeck, and many others.

Tao isn’t a cohesive, page-turning narrative, but rather a series of 27 vignettes, many with nuggets of insights on the pleasures and perils of travel, best digested one at a time.

Mr. Theroux begins the book with a heavy dose of his own work: brief ruminations on subjects like the differences between travelers and tourists, his distaste for airline travel, and the importance of traveling solo—all originally published in the 11 travel narratives he’s penned over the last three decades. This is something of a greatest hits section, which includes some of his most memorable observations on travel, such as, “you go away for a long time and return a different person—you never come all the way back,” and “in countries where all the crooked politicians wear pin-striped suits, the best people are bare assed.”

At least half of the book is excerpts on travel from famous writers, but in one chapter, entitled “How Long Did the Traveler Spend Traveling,” Mr. Theroux seems to take pleasure in revealing how little time some writers spent in destinations they wrote about.

For example, according to Mr. Theroux, D. H. Lawrence spent just a week in Sardinia, but spent 355 pages describing the trip in his book, Sea and Sardinia. Graham Greene spent just 18 days in Liberia preparing Journey Without Maps, and Rudyard Kipling never went to Mandalay, the subject of his famous poem. But Mr. Theroux refuses to tell us how long he spent on the various trips he’s written about over the years.

Mr. Theroux notes in a chapter entitled “Fear, Neuroses, and Other Conditions,” that a large number of history’s great travelers and explorers have been “depressives or bipolar types capable of serious gloom.” David Livingstone was a “manic depressive with an obsession with bowels;” Graham Greene was also a manic depressive and had an “irrational fear of birds;” Henry James was “in a permanent state of constipation;” and a host of others suffered from depression, drug or alcohol abuse, and a variety of other mental problems.

This is one of the most compelling chapters in the book, but Mr. Theroux fails to offer any explicit conclusions on why so many great travelers and explorers were so deeply unhappy. Did their travels take a toll on them or were they malcontents to being with? Mr. Theroux leaves this question for us to ponder, and indeed, throughout the book, he seems more interested in provoking thought rather than spoonfeeding the reader easy answers.

The closest Mr. Theroux comes to diagnosing the maladies of unhappy travelers comes later in Tao, where he writes, “a traveler is a stranger . . . otherness can be like an illness; being a stranger can be analogous to experiencing a form of madness . . . generally the traveler is anonymous, ignorant, easy to deceive, at the mercy of the people he or she travels with.”

Mr. Theroux never mentions in the book the toll that his peripatetic life has taken on him and his family. He once revealed that his wife cuckolded him while he was off riding the rails for his book The Great Railway Bazaar. He returned home to find another man had essentially taken over his role as husband and father, and it would have been fascinating to know if he regretted taking the trip- but unfortunately Mr. Theroux doesn’t go there in Tao.

But Mr. Theroux’s research in this volume is nonetheless impressive. In one chapter, he’s compiled a collection of remarkable travel feats, including little known adventurer’s like Ffyona Campbell who walked the length of Great Britain at 16, Göran Kropp, a Swede who biked to and from Sweden to Nepal, summiting Mt. Everest in between, and Aimé Tschiffely, a Swiss who rode on horseback from Buenos Aires to New York, to name a few.

Tao also has its share of fun moments, most notably enjoyed in a chapter on some of the bizarre foods that he and other travelers have encountered on the road. Readers often remark to Mr. Theroux, “you must have eaten some weird stuff,” and indeed he has. Mr. Theroux has wolfed down snake, turtle, cow’s tendon soup, sparrows, and alligator tails, but drew the line at eating an owl.

If you’ve traveled enough to encounter dishes like the deep fried chicken anus, or simply want that Congolese Monkey Stew recipe, you’re going to want a copy of this book. It might not help you understand your strange compulsion for leaving the comforts of home for the rigors of the road, but it’ll help you appreciate the fact that the hardest trips are the ones most worth remembering.