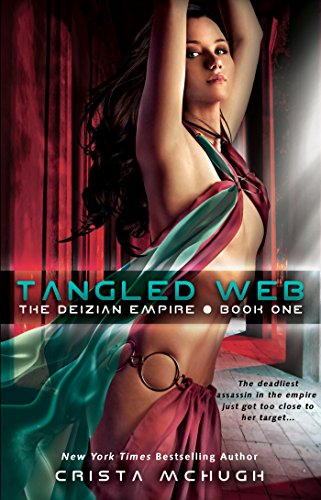 “Tangled Web isn’t a terrible book, but it suffers from a split personality.”

The Deizian Empire has a new ruler, Titus Sergius Flavus, only son of the fallen emperor. To Titus falls the responsibility of channeling the magic of his home world to protect the borders of the world his grandfather conquered.

He has to learn to use his magic effectively, all the while contending with threats from both the native peoples and his scheming nobles.

One of those nobles has taken the opportunity to send the deadliest assassin in the empire into Titus’ household, in the guise of a gifted concubine. Azurha, former slave and wicked warrior, has nothing in mind but to tap her target and gain the riches that will allow her to retire in splendor—until she meets the emperor.

And that’s where the book falls apart.

The first two parts sort of work. She’s done a bit of research on Roman dress and customs, and that was nice. The space part is shakier; it’s unclear why she chose to have a backstory involving a planetary takeover and then do nothing with intergalactic travel (à la Dune). The premise would possibly have worked better in the realm of pure, earthbound fantasy as the space aspect is eminently forgettable—a non-starter.

When the story kept the protagonists apart, it was enjoyable, a light fantasy drama about empire building, assassins, and palace intrigues. It was quite easy to get involved in Titus’ attempts to right the wrongs committed upon the conquered races, and the dialogue between that character and his friends, nobles, servants was well done. Azurha’s interactions as an assassin were exciting and well written.

Unfortunately, these sections appear when the main characters were apart. When they were together, cheesy sentimentality abounded.

From Titus’s permaerection anytime he saw, thought about, or heard Azurha’s name to the instalove between them, their interactions were mainly silly. There was the requisite amount of purple prose, dancing tongues, moaning, squeezing walls, and more erections than you could shake a stick at . . . but no indication of why they would be in love. In fact, there is little development of any relationship between them aside from sex, and thus no reason to care about them together.

If sex alone were the goal, Ms. McHugh would have to bump up the graphic nature of the sex acts and lose the abundance of euphemisms.

As erotica, it suffers from lack of development, believability, and overuse of certain names for sexual organs—a casual count of one short section showed 18 separate uses of one particular word. As a sci-fi novel, the part that works best, it suffers from unlikely sex shoved in whenever the main characters were together. Both of these issues, along with a misunderstanding of the uses of may/might, indicate a lack of competent editing.

Ms. McHugh handles action and intrigue well; perhaps it would behoove her to stick with that.