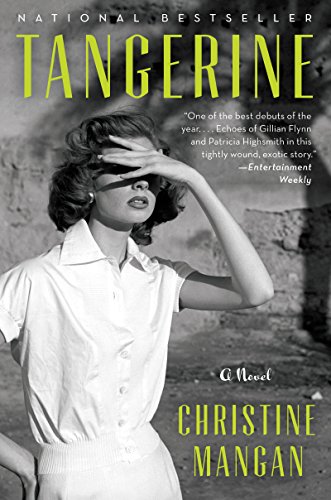 Christine Mangan’s noir novel, Tangerine, draws a fine line between homage to Patricia Highsmith’s Ripley novels and downright copying or pastiche. While Tangerine is well-crafted, engaging, and clever, it is all too familiar.

Told in alternating first-person narratives, the plot of Tangerine centers around the pathological friendship of two young women, Alice Shipley and Lucy Mason, who meet as roommates at Bennington College in the early 1950s.

Recently orphaned, the wealthy, fair-haired, delicate and fragile Alice looks to Lucy for support, adventure, and as a confidante. Lucy, a dark-haired, cunning scholarship student from a dysfunctional, working class-family falls in love with Alice and her money and takes advantage of her vulnerability.

The two girls fantasize of traveling the world after college. While in school Alice and Lucy are inseparable until Alice starts dating Tom. Lucy then becomes insanely possessive of Alice and resentful, and a terrible “accident” occurs. Alice is traumatized once again, and Lucy leaves school.

After Bennington, Alice hastily marries a dilettante and moves to Tangiers with her ne’er-do-well husband. Much to her astonishment, Lucy, who has unfinished business with Alice and sees an opportunity to take over Alice’s life, turns up at her door, and once again, wreaks havoc.

Other than the genders of the protagonists, the similarities between Tangerine and Patricia Highsmith’s The Talented Mr. Ripley are extraordinary. Both Lucy and Tom are sociopaths, often detached and cool in their calculations. Lucy, like Tom Ripley comes from a poor, broken home and preys on the wealthy and vulnerable.

Both are filled with rage and resentment. Tom Ripley is infuriated by Marge, his friend Dickie’s girlfriend, a dilettante, just as Lucy interrupts Alice’s relationships with the wealthy Tom and her ungainfully-employed, spendthrift husband, John.

When Lucy is called out by Alice, she describes herself: “I could feel it, as I had in the past, growing out of control. As it had on the day of the accident.” And like Tom Ripley, Lucy justifies and rationalizes her actions and digs herself in deeper and deeper and causes more and more damage.

The Talented Mr. Ripley, came out in 1955 while Tangerine, though a contemporary novel, is set in the 1950s. While the homoeroticism in Highsmith’s work is a bit more subtle, the relationship between Lucy and Alice, especially Lucy’s feelings toward Alice, are overt.

Lucy is obsessed with Alice, studies her, watches her, controls her, and loves her possessively. She explains her feelings toward the more ambivalent Alice: “Part of me wanted to seize her then, to grasp her fragile shoulders and demand to know why---why had she locked herself away with a man who was so obviously unworthy of her love?. . . . We had shed our layers at last, and Alice had returned—old original ancient Alice—whom I had fallen in love with.”

Even the locations and movements of the protagonists are similar in The Talented Mr. Ripley and Tangerine. Both works start out in the United States, include unhappy stints by the villains in New York City, and then move overseas.

Finally, Tangerine is overrun by far too many cliches or tropes. The fair, fragile Alice in contrast to the dark, strong Lucy is straight out of Poe’s “Ligeia,” as well as numerous other works. The setting in Tangiers, stereotyped as a mysterious, hot, dangerous, lawless place that is in the midst of a revolution, is also hackneyed.

Tangerine is also inspired by such Hitchcock films as, Strangers on a Train (also based on a book by Highsmith), and Notorious, and numerous Gothic novels.  But most of all, Tangerine is a rewriting of Highsmith’s Ripliad.

Even though Christine Mangan is clearly well versed in noir and Gothic literature, a fine storyteller and skilled writer, her novel is far too predictable and lacks originality.