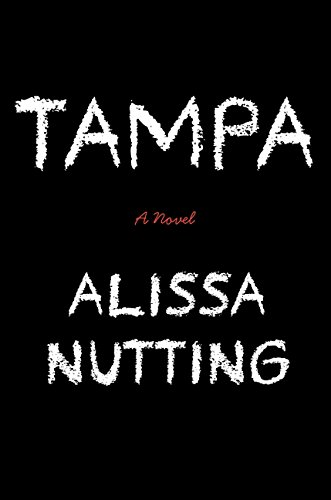 After 500 years, there aren’t that many new ideas left for novels—but Alissa Nutting may have just found one.

Her new novel, Tampa, is written from the viewpoint of a female sexual predator. Her narrator, Celeste Price, is a middle school teacher who has seduced two of her students, and contributed to the death of the father of one of these boys. Tampa is Price’s cold confession.

While some readers will consider the very premise of Tampa a disturbing non-starter, others will find it bold and interesting. We do not increase our understanding of deviants and by ignoring their existence or by dismissing them on simplistic terms.

Professor Nutting’s narrative is smart and biting. Her narrator is a fount of wisecracks, i.e., an older man is described as “libido kryptonite.” While a book like Tampa could never be termed a comedy, it is stocked with funny one-liners. And the not-too-serious narration makes it much easier for the reader to push through the unsettling content.

Professor Nutting has done her homework on sexual predators. Studies reveal that these people are frequently selfish and calculating. They have been characterized as “amoral” rather than “immoral”—indifferent to the lives they scar. This amorality is cited as a reason that recidivism is so high among sexual predators.

If Tampa has a flaw, it lies with Professor’s Nutting somewhat unidimensional treatment of Celeste. We learn that she is attractive, vain, and obsessed with boys. That’s about it. It is odd that Professor Nutting does so little with Celeste’s past or even her present.

For instance: Does Celeste like animals, international cuisine, art, or sports? Celeste is an English teacher, but we never learn what she likes to read or where she stands on the reforms rocking her profession. Is there anything to Celeste besides her vanity and insatiable appetite for premature males? Professor Nutting misses an opportunity to make Celeste Price a complex person.

There is a short list of satisfying books written in the voice of a villain: John Hawkes’s Travesty (homicidal driver kills his daughter and himself), Peter Carey’s The True History of Kelly Gang (fictionalized memoir of Australia’s notorious 19th Century bandit), Mahi Binebine’s Horses of God (boy from the Moroccan slums explains his path to Islamist suicide bomber) and some others. Nonetheless, Professor’s Nutting’s decision to give voice to the sexual predator living in our midst ups the ante on this literary fiction subgenre.

Tampa won’t be for everyone. But it is a smart and realistic book on an important subject. In a densely populated fiction landscape filled with cliché, Professor Nutting veers into difficult territory and unearths virgin soil.