Tales of Two Cities: Paris, London and the Birth of the Modern City 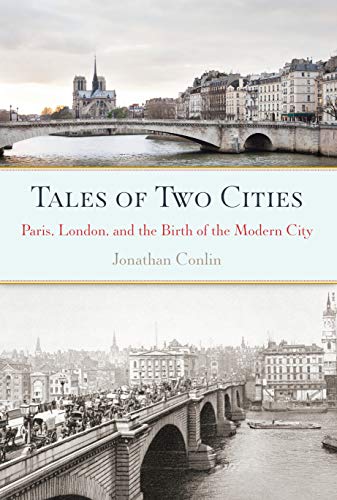 “. . . an entertaining account that strings together fascinating factoids into a tapestry of urban history and cultural anthropology.”

The French cancan originated in Britain. Sherlock Holmes was based on a French character. The modern restaurant had its origins in French citizens dining on British food. The historian Jonathan Conlin traces the histories of six social institutions—the street, the cemetery, the apartment, the restaurant, the underworld, and the music hall—in both France and Great Britain.

Conlin focuses on the period 1700 to 1914. This roughly corresponds to the transition from the Early Modern to Modern. (When talking about historical periods, especially those that are capitalized, care should be taken to understand that a broad brush is used.)

Conlin has written a readable pop history that is neither a parallel history nor a comparative history. His project investigates something much more nebulous. Tales of Two Cities explores how France and Great Britain influenced each other. The book opens with a bumpy carriage ride that culminates in the near destruction of a fashion doll. A fashion doll was a miniature doll, dressed in Paris's latest fashions, and transported back to England for dressmakers to copy.

These trendy dresses would then be purchased by image-conscious upscale Londoners and other society types. Even in the early seventeenth century, Paris had a reputation as fashion epicenter.

In his analysis of the restaurant, Conlin evokes the cloistered sensuality of Jean, Duc des Esseintes, and his ill-fated attempt to travel to England for a healthy meal. Des Esseintes was the protagonist of Joris-Karl Huysmans's Á Rebours (1884).

Conlin writes, “Like subscription concerts and theatres, restaurants supposedly involved a new middle class gaining access to a form of entertainment hitherto restricted to the court or a noble elite, and making it into a public stage on which to parade their respectability.” A major theme running throughout the analyses is the growth and power of a new middle class. While the Early Modern has many aspects that seem alien, by the eighteenth century European culture exhibited many things modern city dwellers would find commonplace.

Crime and criminality plays a major role in how the modern city developed. The heavily centralized and militarized policing of Paris is contrasted to the lawless streets of London. “In France, where the term 'police' originated, the concept derived from the idea of policer ses moeurs, 'policing manners.' In 1667, King Louis XIV established the lieutenance générale de police, which reformed the magistrature and took over a host of functions and responsibilities: for religion, public health, roads, paving, poor relief and security.”

Later Conlin writes that for the English, “the remit of the 'police' embraced sanitation, paving and lighting, as well as regulations of markets for provisions and the policing (in the more familiar, modern sense) of minor infractions of public order.” Today these functions are now split up into discrete bureaucracies or those in charge of maintaining the urban infrastructure.

What Conlin achieves with this history of influences is an entertaining account that strings together fascinating factoids into a tapestry of urban history and cultural anthropology.

It is easy to take for granted the restaurant's place within the city. It feeds hungry people. The book illustrates how it also served the purpose of empowering an emergent middle class. Conlin weaves together a web of interactions and accounts from both fiction and nonfiction sources. He does this with the straightforward prose of a journalist and the intellectual imagination of a historian.