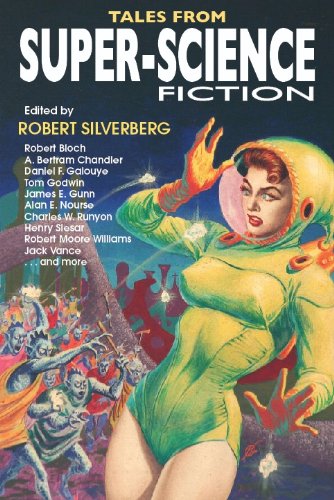 “. . . required reading for fans not only of science fiction, but of the short story form as well.”

By the mid-fifties pulps and magazine anthologies devoted to a specific genre were in their golden days. The titles were popular but by the turn of the decade, a once thriving industry and creative force in American literature and culture gave out to the newly arrived paperback books and of course, that demon found in almost every living room, Television. Even with all the competition, that period of science fiction writing was an extremely vibrant and original time, one ripe for discovery by readers today.

Robert Silverberg, who also edited this anthology, opens his introduction to this wonderful anthology with the best way to describe this book:

“The operative word was FUN.”

The respected award-winning author goes on over the next 15 pages to paint a vivid and loving picture of New York City and the world of magazines over the last five years of the fifties. As enjoyable and enlightening as the stories in the book are, it is Mr. Silverberg’s introduction that forms the heart of the book.

Along the way he writes warmly of his friendship with Harlan Ellison, his experiences with editors who had long ago realized they didn’t understand the stories that they were reading—but somehow knew when they were good—and publishers and owners who had no problem killing a magazine in a heartbeat if it was stalling on the newsstands. His nostalgic introduction sets a perfect frame for the stories that follow.

Super-Science Fiction was a new anthology magazine first appearing on newsstands in September of 1956 with a cover date of December. This collection from Haffner Press opens with the very first story that appeared in the new title, “Catch ’em All Alive.” As editor Silverberg recalls in his introduction, he had originally titled the story “Collecting Team.” Even with the name change, the story has gone on to become a classic in the world of sci-fi writing. It also impressed the editor so much that he clamored for more stories centered on the idea of a “collecting teams.” Mr. Silverberg and others, anxious to get the work, delivered.

Reading it today, “Catch ’em All Alive” is a bright and easy going story that sets the tone for the magazine. The descriptions of the fauna and animals still sound crisp and lively. The naiveté of some of the crew in the execution of their job is understandable especially given the considerably less than cynical time. The eventual conclusion, while not as shocking today as it was in 1956, will bring a smile to the face of any reader.

In many ways the story set the tone for what was to follow over the magazine’s run. Nothing really wild was ever going to appear, but that didn’t mean the stories couldn’t challenge the reader, or amaze them. Mr. Silverberg and Haffner Press have gathered 15 of the best and most entertaining stories from the magazine’s three year run and each one is a peach. Some of them anticipate twists that would show up in later novels or television shows.

Others are still as edge-of-the-chair thrilling as they were when they first saw print.

One of the standouts is Henry Slesar’s “Who Am I?” He wrote for television and many other anthologies. Already successful in the world of advertising, he stayed active in the industry till his last days. Slesar was a skilled and gifted writer who knew his way around the way people think.

“Who Am I?” centers on a young man who has been drifting unconscious in space. Picked up by two men who are doing their best to stay afloat as traders, the young man is revealed to be a multi-personality enigma to the men. As they dock at a gambling site they run into a blue haired woman who seems to know him. Along the way the young man exhibits at several strong personalities. The ending is thoughtful and anticipates the plot of several TV shows and movies down the line. Slesar’s ability to keep the reader engaged as the young man speaks in different voices is a thrilling piece of very tight writing.

Other classics include Jack Vance’s “Worlds of Origin.” In 1996 Vance was named a Grand Master by the Science Fiction Writers of America. “Worlds of Origin” is the ninth and very last story written as part of his series devoted to the character Magnus Ridolph.

Other writers in the anthology include Robert Bloch (also known as the author of the novel Hitchcock based the film Psycho on, but he was much more than that single piece of writing), Robert Moore Williams, Alan E. Nourse, and of course, Robert Silverberg. Many of the stories are being published for the first time since first printed years ago. And even more important, stories published under pseudonyms, a common practice of the day, are now attributed to the original author.

Charles Runyon made his first short story sale to Super-Science Fiction. It is a gripping tale of the loneliness that space can bring to one man titled “First Man in a Satellite.” In some ways, the story, which was published in 1958, anticipated the reality of the upcoming maned flights, both technologically and the people involved.

Other writers in the anthology include Robert Bloch (also known as the author of the novel that Hitchcock based the film Psycho on, but he was much more than that single piece of writing), Robert Moore Williams, Alan E. Nourse, and of course, Robert Silverberg. Many of the stories are being published for the first time since first printed years ago. And even more important, stories published under pseudonyms, a common practice of the day, are now attributed to the original author.

Haffner Press has created a book that lives up the publishing house’s long-standing commitment to the full history of the science fiction short story medium.

Many of the stories feature the illustrations originally accompanying the stories. The inside jackets of the book bear a total of 16 covers in full color—an excellent reminder of the incredible quality of the importance and high quality of the art work created for the magazine by Ed Emshwiller, Frank Kelly Freas (what a pair of cover artists!), Paul Orban, and William Bowman.

In keeping with the original source of the stories, the book is slightly smaller than a regular Haffner Press release. This only adds to the fun that Mr. Silverberg spoke of in his introduction as the feel of the book will take many of us back to the time when these stories appeared on the newsstand. For new readers they will have a sturdy and durable book they can take anywhere.

This volume should be required reading for fans not only of science fiction, but of the short story form as well.