Tales from India: Stories of Creation and the Cosmos 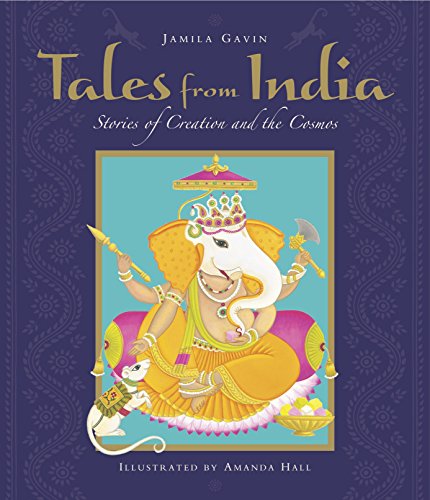 “Tales from India is exemplary, a model of narrative and visual storytelling by two talented and inspired artists. Readers interested in Indian or Hindu mythology, or even simply in ancient stories or folk tales from other cultures, will treasure this beautiful, engaging volume.”

Jamila Gavin’s strength and assurance as a storyteller could put her on equal footing with the heroes and heroines of the tales she tells in Tales from India. Imagination, courage, and vision necessarily underpin a decision to retell stories that derive from Hinduism, a religion so ancient that its stories will have been told and retold countless times through equally countless generations.

As Ms. Gavin notes in the Introduction, these tales have been told in different ways in different regions, and have changed with place and time; “there are as many versions as there are languages and dialects.” Rather than search for any one authoritative version, she chose to tell these ancient, well-known tales from a perspective that made sense to her.

Even though the essence of these tales will be familiar to many readers or listeners, Ms. Gavin’s recounting is captivating and crisp. She is a masterful storyteller. She engages the reader or listener with her first few words, and the interest level remains high throughout.

Each tale is brief yet full, the events and, often, accompanying moral or lesson unfolding in a few pages. The stories are distinct and each stands well on its own, so they can be enjoyed independently or out of sequence. Nevertheless, Ms. Gavin presents the tales in a logical order, with fine rhythm and pacing, and the better approach will be to read or hear them as laid out.

The stories in Tales from India owe much to the fascinating art and visual design of illustrator Amanda Hall. Her study of Indian art is apparent, but her work does not attempt a replication of ancient styles. Her illustrations, while consistent with traditional presentations of the mythological characters, meld original conceptions of the scenes and events recounted. She depicts key events, scenes, and character with rich color and attractive, stunning attention to detail. Beautiful, not-quite traditional images of varying design border each page. Lovely full page sari-style patterns, each a different color, separate the stories from one another.

Both author and illustrator credit multiple cultural influences in their work, and these are apparent in the presentation of the tales. Even some of the tales themselves will ring familiar in reference to other cultures and religions than Indian and Hinduism.

Ms. Hall’s illustrations blend modern and innovative style with traditional design and color. Gavin’s narrative is clean and unadorned but tells fantastic tales replete with magic and mythology. She uses a handful of Sanskrit words, defined to English in a brief glossary.

The visual element of Tales from India is central to such an extent that the book can be characterized as a picture book. That said, the age recommendation of nine and above is appropriate.

The stories retain much of the authentic frankness of traditional tellings, a few of them recounting events younger readers or listeners might find frightening or bizarre. Yet the rich and attractive illustrations do not depict worrisome scenes; instead, they temper them by focusing the reader or listener on interesting and appealing details. With appropriate cautions, then, even some younger readers will find the tales fascinating.

Tales from India is exemplary, a model of narrative and visual storytelling by two talented and inspired artists. Readers interested in Indian or Hindu mythology, or even simply in ancient stories or folk tales from other cultures, will treasure this beautiful, engaging volume.