A Talent for Murder: A Novel 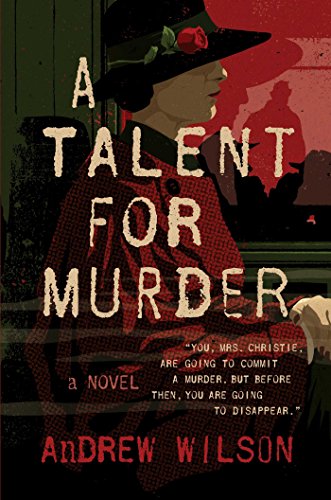 Mystery writer Agatha Christie disappears for 11 days in 1926, but seldom speaks about it and omits entirely any mention of it in her autobiography. Andrew Wilson attempts a creative explanation for Ms. Christie’s disappearance in A Talent for Murder.

In London to visit her literary agent, Agatha Christie feels a touch on her back as she prepares to board a train on London’s Underground. She loses her balance (or is pushed) and is pulled to safety by Dr. Patrick Kurs, a general practitioner as well  as a nasty piece of work.

“At the moment I removed my handkerchief from my mouth, again in a voice only I could hear, he said, “I wouldn’t scream if I were you. Unless you want the whole world to learn about your husband and his mistress.”

In 1926 such a threat was more powerful than it is in the 21st century. Respectable women such as Agatha Christie abhor being involved in scandal, but what Dr. Kurs proposes in much worse than a humiliating scandal.

“What I propose is something far more than mere financial gain. I have, I suppose one could describe it, a certain scheme for you . . . It’s a plan that you alone can execute. You, Mrs. Christie, are going to commit a murder. But before then, you are going to disappear.”

Dr. Kurs, he of the long, thin spidery fingers and sickening bad breath tells Agatha that he the physician for Archie Christie’s mistress, Nancy Neele, and she has confided in him. Dr. Kurs tells Agatha he will send some of the letters to her home.

Letters alone and the possibility of scandal is not enough to force Christie to commit a murder, to murder Dr. Kurs’s wife to be specific. Dr. Kurs assures her that he has other means of persuasion.

After leaving Dr. Kurs’s malevolent presence Agatha encounters John Davidson, who holds an unspecified job in British intelligence, and his companion, Una Crowe, a young and curious woman who may remind some readers of a British Nancy Drew.

John Davidson compliments Agatha on The Murder of Roger Ackroyd, a mystery that gained considerable commentary. He also encourages her to consider a job for his department. For a moment Agatha considers telling him of Dr. Kurs and his proposition, but is still uncertain if it actually happened or she imagined it. She decides she must handle the situation herself to be certain no word of her family situation reaches the newspaper.

Dr. Kurs sends a letter to Agatha’s home directing her meet him for further instructions. At that meeting Agatha learns that a scandal is not Dr. Kurs’s only threat. If she fails to agree to his plan for his wife’s murder, then the life of Archie and more terrifying, the life of her seven-year-old daughter, will be at risk.

In case she plans on defying him, he adds to his threat. “And by the way, if you think you could just call the police and have me arrested, please reconsider. I have an associate, a degenerate character who takes pleasure in this sort of thing . . . I think he is looking forward to being given the chance to act out his perverse desires.”

With the threat of her daughter, Rosalind, being the object of a psychopath’s twisted sexual desire Agatha capitulates. She follows Dr. Kurs’s plan, abandons her car, and checks into a hotel under a variation of the name of Archie’s mistress. She becomes Mrs. Teresa Neele and hides away in her hotel room while police begin an extended search for her whereabouts or, more likely, her corpse.

Interspersed with chapters in Agatha’s point of view are chapters detailing the actions of Ms. Una Crowe. Una who has always had a secret yearning to write is encouraged by John Davidson to look into Agatha’s disappearance in hopes of solving the case and selling her scoop to the papers. John Davidson hopes that the case will awaken Una’s ambitions and take her mind off the death of her father some months before.

Una takes to her search for Agatha with the enthusiasm of a young, naïve girl who has no experience recognizing true evil. She steals a letter from Agatha’s home in which news of Archie’s affair is revealed. John Davidson is appalled by her actions. This is not what he had in mind when he encouraged Una.

Una tracks down Nancy Neele and learns that Ms. Neele has given letters to Dr. Kurs. Under the pretense that she is suffering from nervous tension Una secures an appointment with Dr. Kurs.

Suspense increases as Agatha meets Fora Kurs, and Una accepts an invitation from Dr. Kurs to meet Agatha. Needless to say neither meeting ends well, but in unexpected ways.

Andrew Wilson’s imaginative account of what really happened during Agatha Christie’s mysterious 11-day disappearance is another instance of many writers inserting either imaginary characters or real individuals into mystery novels. Sherlock Holmes is a particular favorite for writers to use as a character in their own works.

This is a first for Agatha Christie as a character in a mystery, and it may not please many fans of Ms. Christie. As the creator of such characters as Miss Marple and Hercule Poirot, both of whom are never surprised by man’s or woman’s capacity for evil, the character of Agatha Christie in A Talent for Murder seems rather a woman more likely to burst into tears than one capable of plotting such classics as The Murder of Roger Ackroyd, Ten Little Indians, and Murder on the Orient Express. In fact, all the female characters are a little too prone to tears.

For mystery fans who are unfamiliar with Agatha Christie and her work, A Talent for Murder may appeal as a suspenseful tale of murder and blackmail.