A Tale of Two Murders (A Dickens of a Crime) 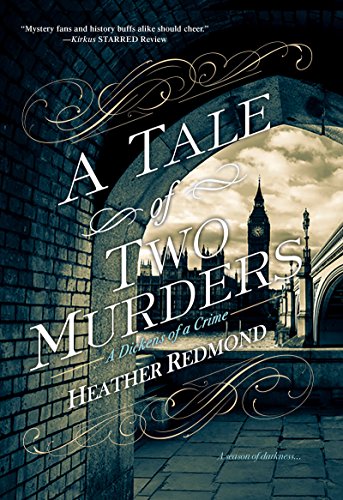 Victorian London has a new sleuth and his name is Charles Dickens. Yes, that Dickens of The Tale of Two Cities fame. However, in this novel author Heather Redmond introduces us to a young Charles Dickens, a budding journalist and bachelor.

Dickens is invited to dinner at the home of the newspaper’s co-editor, George Hogarth. The young reporter is always on the lookout for a good meal, and he is also smitten by his boss’s nineteen-year-old daughter Kate Hogarth. Their dinner is interrupted by a scream from a neighbor’s home. When Kate, Charles, and Mr. Hogarth rush over they find a young Miss Christiana Lugoson has taken ill. Kate spends the night taking care of the sick girl and is shattered when the poor young woman dies.

Dickens learns of another mysterious death of a young woman named Marie Rueff nearly a year ago. Could both deaths be connected?

Charles nodded soberly, “So . . . my dear Miss Hogarth . .  .we must continue our lines of inquiry.”

Her nod matched his, “I share the same resolve. I will help in any way I can.”

And so a pair of amateur sleuths is born. The book is certainly character-driven and the beginning is a little slow. But soon the story takes some devious twists and turns and nothing is what it seems. The lovely Kate Hogarth, who later becomes Mrs. Charles Dickens, is truly delightful. A feminist in a corset.

“I’m saying that you will not be my only choice. If you let me down, there will be others.”

“How could I let you down?”

“By talking only of lovemaking, and never of anything else,” she said. “I want to know what happened to Miss Lugoson and Miss Rueff. Give me a mystery, Mr. Dickens, and a solution, and I will follow you into places I should not.” She gestured around the room, with a significant nod at the door.

Charles is a gentleman even when he is tempted by the lavender fragrance in her hair. The pair work together to figure out what happened to the young women. Kate has access to members of the upper crust, and Charles has the resources of the newspaper to gather more information. Through his dogged investigation, Charles uncovers the truth about not just the two murders but also a suicide. The ending promises more adventures with Kate and Charles.

“I would like you to trust me.” She twisted her hands together. “I believe we could uncover great things together, that you would bring me more adventure than the average life might.”