Syrian Notebooks: Inside the Homs Uprising 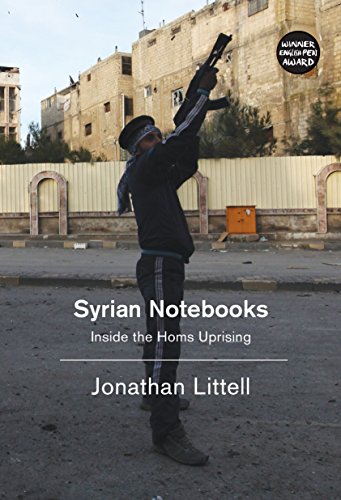 The news coming from Syria is not good. The initial exhilaration and hope ignited by the Arab Spring has faded into the background. In the place of toppled dictatorships and absolute monarchs, Syria holds on to its power. Every day news reports recite the atrocities committed by ISIS, yet another site of carnage, slaughter, and cultural destruction. Jonathan Littell waded into Syria in 2012 to cover the Homs Uprising for the French newspaper Le Monde. His Syrian Notebooks record his experiences over a half-month period.

Besides being a reporter, Littell is the son of prolific espionage writer Robert Littell. Littell fils wrote the controversial epic The Kindly Ones, itself a kind of catalog of atrocities committed by the Nazi regime.

Littell has experience working in war zones for humanitarian organizations. Syrian Notebooks, unlike The Kindly Ones, is written in prose that is brief, fragmentary, and raw. He does his best to clarify the complexities of the situation.

The default position of the United States news consumer is to see all Muslims as Arabs. Syria possesses a multi-ethnic, multi-religious, and multi-confessional nation-state, with Alawites, Druze, Christians, and Sufis to name a few examples. The Alawite sect of Islam hold the political power, embodied in the thuggish and bloodthirsty Assad dynasty.

In addition to the ethnographic complexity, Littell explains the Baathist regime's stranglehold of power. The Air Force's intelligence ministry is the most feared government organization. At the beck and call of the Baathists are the shabbiha, “mafia thugs” in Littell's words, who operate as religious enforcers. Snipers kill civilians and rape has been used as a weapon for those who don't toe the line.

The Homs Uprising originated in the practical pursuit of democratic reform. The citizens simply stopped wanting to be subjects beneath the Assad family jackboot. Because the Homs Uprising did not go as smoothly as the other Arab Spring rebellions, the situation became more tenuous and more desperate.

Littell asserts that ISIS is a creation of the Assad regime. Syria is simply following a method used by Russia and the United States to bankroll religious extremists to fight as their proxies. As the uprising progressed the priorities changed. The wish for democratic reform gave way to the desire for the rule of law. Some elements of the Homs Uprising even wanted to internationalize the conflict by calling for a jihad. These individuals think it will spur an international response. Unfortunately, Western public opinion balks at the concept of jihad, regardless of cause, and sees religious-inspired violence as barbaric.

Littell also witnesses how the Homs Uprising is a nascent political revolution, but clearly not a sexual revolution. Throughout his stay, women stay invisible and separate. To be fair, the American Revolution began in 1776 while women won the right to vote in 1920. But a recent interview with Mona Eltahawy in the New York Times Magazine brought up the example of Khadija, Mohammad's wife, who was a business owner, a divorcee, and was the one who proposed to Mohammad.

Another troubling aspect of Syrian Notebooks was the desire for international involvement. Unfortunately, the West is suffering from military fatigue, political over-reach, and imaginative poverty. In the United States this stemmed from President George W. Bush's farcical invasion of Iraq, not as an act of liberation, but as a shortsighted stunt to get a second term. Politicians, policymakers, and Beltway careerists seem surprised that the nation-building project is a long game.

Syrian Notebooks exposes the raw nerve of urban warfare on a personal level. Death is horrific and commonplace. It is a snapshot of a stillborn revolution, drowned in embryo. What the Homs Uprising did succeed in was obliterating any notion of Baathist legitimacy. Like the Soviet Union after Prague Spring, its days are numbered.