Syria: The Fall of the House of Assad 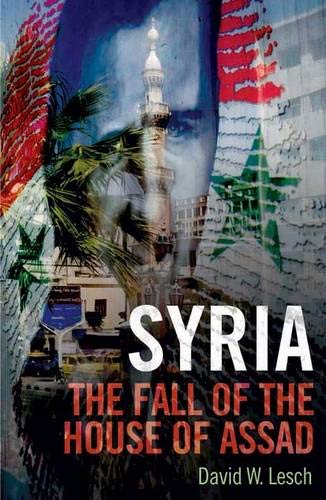 “David Lesch’s Syria is timely, relevant, and to the point, providing the educated reader with everything needed to make sense of what is happening in that country.”

“Honestly, I don't see a military solution in the Syrian crisis. The mosaic of Syrian society is such that we need to put on the table an agreement or a settlement that ensures that interests of each group is looked at, whether they are Christian, Druze, Suni, Shia, Alawi, Kurdish—so that the protagonists know what the option is, that you can stop fighting but it doesn't mean you'll lose everything. Your interests will be protected," said Kofi Annan, in an interview given after he had resigned his role as U.N. and Arab League envoy to Syria.

What Annan calls “the mosaic of Syrian society” is indeed the great challenge to ever achieving a stable government, not just in Syria itself, but also in Lebanon. Annan, whose efforts were effectively undermined by Russia and China, admits that he doesn’t understand why.

Nor, if we are honest, is it even clear why the West is supporting certain elements of the Syrian opposition, although Syrian President Bashar Al-Assad has, by not disassociating his regime from repeated acts of genocide, put himself and his regime in an indefensible position.

Mr. Lesch begins his book by explaining what he means by the “fall” of the house of Assad, which has ruled Syria for more than 40 years. After all, at this writing, Bashar Al-Assad is still president of the country.

What Mr. Lesch points out is that Assad has effectively fallen as genuine ruler of the people of Syria. “Assad has morphed into a real-life tyrant. This is evident in his sanctioning of the violent crackdown on what were, at first, peaceful protests that came out of Arab Spring.”

Violent civil war was already underway in Syria when Mr. Lesch made his draft public for review.

At this writing, close to 7,000 people have died, and nearly 200,000 refugees have streamed into neighboring Jordan. The Syrian government has waged an unrelenting campaign of arrests that has snared tens of thousands of people. In cities throughout Syria, including the capital, Damascus, and the largest city, Aleppo, the opposition had coalesced around armed groups identifying themselves as elements of the Free Syrian Army.

The Syrian government has attacked from the air and on the ground. The opposition is supported by arms and funds from across the border in Turkey.

So it would be difficult to deny Mr. Lesch’s claim that Assad has effectively ceased to govern. The factions he represents—most importantly, the Alawi religious minority—will have to find another leader in any post-civil war regime, as certainly Assad would never be accepted by opposition forces under any circumstances, and he is likely to be charged with war crimes.

All of which is especially ironic, since Assad started out as the ruler who was going to turn Syria into a modern democracy. Mr. Lesch traces Assad’s career back from the beginning, when he reluctantly took power after his older brother (who was slated for the job) was killed in an accident.

Assad was studying ophthalmology in London when he was called to the presidency in 1994. He took control of an autocratic and oligarchic regime that his father Hafiz had built over the past 30 years.

Yet the phrase “took control” is deceptive. The military and the security forces in Assad’s regime remained out of his control and continued to arrest and torture not only those Syrians suspected of opposing the regime, but also people simply chosen at random whose sufferings were intended to keep the population in hand.

Mr. Lesch tells the story of how, at one point, he was traveling to Syria to meet with the president and was himself detained by the security forces on the way to Damascus. An unnamed official played with a loaded gun while questioning him, and Mr. Lesch narrowly escaped torture himself. When he complained to President Assad at their meeting the next day, Assad could do little but make soothing noises.

With no political justice, Syria also can boast no economic fairness. Under Assad’s father, most of the working economy was placed in the hands of friends and relatives of the family.

As Mr. Lesch explains, in 2005 countrywide unemployment was 25 percent. The banking system was small, restricted, and largely publicly owned. There was a very tiny stock market. Economic regulation was entirely without enforcement, and the entire economy depended on a system of corruption. Again, these forces were too big for Assad to reform, although there is no real indication that he ever tried.

The plight of the average Syrian got worse as drought hit farming and as the global financial crisis made things even tougher for the Syrian economy—except for the happy few, of course.

Repression was so strong in Syria that the Arab Spring took longer to take hold there. Finally, in the impoverished city of Deraa in March 2011 the security forces arrested and tortured schoolchildren who had written anti-regime graffiti on a wall. Protests ensued, firmed up in Deraa, and Arab Spring began in earnest in Syria.

Mr. Lesch tracks all of this at just the right level of detail. He explains the composition of the political and economic factions that held power in Assad’s government, as well as those who were kept out of it. He shows how the country functioned until 2011, and how it finally began to fall apart.

Most usefully, he takes the reader right up to the current level of conflict and provides some conceivable scenarios for its resolution. He also explains the importance of the Iranian-Syrian alliance.

The only aspect of Syria: The Fall of the House of Assad that could be improved is more detail on the roles of Russia and China in the Syrian economy. Both countries are heavily invested in Syria, and while Mr. Lesch does describe Russian involvement to some extent, there is little about China. It is true that a dearth of public knowledge about these subjects exists, but if more were known a solution to the conflict might become easier to envision.

That is a slight criticism for what is a major contribution to our knowledge of Syria and the Middle East. Anyone who seeks a real understanding of these subjects must read this book.