Symphony for the City of the Dead: Dmitri Shostakovich and the Siege of Leningrad 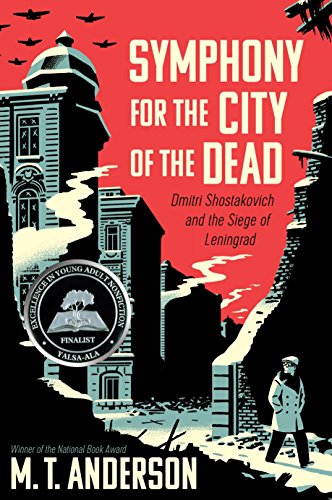 In my college years I fell hard for the shadows and complexities of 20th century Russia. I lived the terrible winters vicariously, studied the strange forms of the avant-garde artists, looked for some sign of humanity in the portraits of, say, Stalin. It wasn’t easy keeping all the politicos and reversals of fortune straight, but the facts were never the point. I was obsessed with the emotive landscape of a vast, harsh, battered country.

M. T. Anderson, the bestselling author who won the National Book Award for his ambitious The Astonishing Life of Octavian Nothing, Traitor to the Nation, Volume I as well as the Los Angeles Times Book Prize for Feed, has, in his new book of nonfiction, reached far and wide again.

This time, in Symphony for the City of the Dead, his focus is on Dmitri Shostakovich, the genius composer whose “Leningrad” symphony, produced within impossible conditions, roused and inspired a city under German siege. It helped to turn the heads of allies and to solidify sympathy for a country that had unleashed purges and executions upon its own people. It becomes proof, in Anderson’s hands, of the power of a single individual set against the backdrop of mass starvation, dying, distrust, and a nearly 900-day blockade of a former fairy tale.

To tell the story of music Anderson must also tell the history of Russia during this heartbreaking time. Shostakovich was born in 1906, when Leningrad was known as St. Petersburg and when Russia was still Russia (not the Soviet Union) ruled by a tsar.

Soon World War I would disrupt the fragile country. In 1917, a massacre known as Bloody Sunday would help raise the red flag of the revolution. Shortly thereafter, the belongings of the wealthy and middle class would be redistributed, often violently, in the name of progress. And then the Germans, a Soviet ally, will break every promise they had made and march in the direction of the great bread basket.

Against this backdrop, Shostakovich would study music in frigid cold conservatories, excel both at playing the piano and composing, get involved in experimental theater, fall in love, start a family, serve on the front as a fireman, and struggle (unsuccessfully) to save friends who fell under the black cape of suspicion.

Many in his circle were humiliated, lied about, executed. Shostakovich himself was both exalted and brutally denounced. He was certain, many times, that death was coming for him. Miraculously (and perhaps because of his fame) he survived. He anxiously lived to write the famous “Symphony No. 7”—a symphony that made its way to the broader world across unimaginable distances.

Anderson’s research, his commitment to this story, is beyond admirable. His source notes, his bibliography—all speak of a writer determined to untangle the complexities of politics, war, landscape, music, fate, good fortune. The facts are well placed. The interweaving of the personal against the political is well handled. There is so much value here in these pages.

Anderson trusts his young readers with complicated history and ideas—an excellent decision. One wonders whether his readers might have been trusted with more vibrant language as well—more rhythm in the sentences, more plastic or telling analogies. A devastated war scene is described, for example, as being full of “hubbub”—an odd choice to the ear. This sentence, too, stopped me in my tracks: “The poet Anna Akhmatova, as striking as an idol and carrying herself as if she were already a statue in a ruined temple, would stalk through the crowds of guests, engaged on her strange affairs.” Later: “Hope and belief seem insubstantial. Unlike shrapnel, they leave no trace when they lodge in our heads.” Though a previous paragraph discusses phantom shrapnel, the analogy isn’t particularly helpful to the majority who have not had shrapnel lodged in their heads.

All of which had me stopping and thinking—often—about the kind of language best used in nonfiction for young readers. Because please don’t get me wrong. Symphony is an important book. A must-have for high-school classrooms and libraries. It’s the work of an author who has never jumped onto any trend-wagon, but has instead followed his own keen intelligence toward a big, essential story.

Let’s trust our younger readers with more histories like these, and let’s keep exploring the sound of such stories, too—the patterning and imaging of nonfiction.