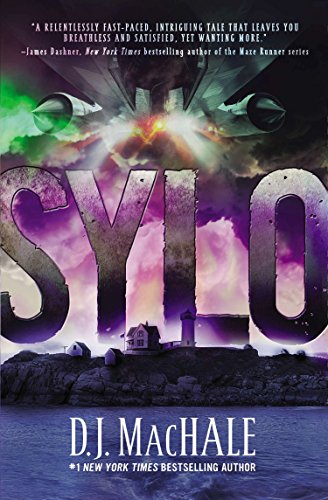 “Mr. MacHale is a master of intrigue, pacing, and adventure.”

It seems like a normal Friday night football game on Pemberwick Island, Maine. Fourteen-year-old Tucker sits on the bench yearning (and dreading) to be called into the game as standby for the star runningback. But the high school’s top player suddenly dies on the field after scoring a touchdown.

An autopsy will find no cause of death.

High on shock and adrenaline, Tucker and friend Quinn sneak out of their respective homes for a midnight bike ride around the island as they’ve done so many times in the past. Along the beach the boys witness a mysterious black shadow in the sky that first “sings” then explodes. Local authorities aren’t especially interested in the event.

A couple of days later, hundreds of military men parachute from helicopters and storm from landing vessels and take over the island. They are part of Sylo, a secret branch of the U.S. Navy. Their stated purpose? To isolate and quarantine the island because they say a lethal virus has infected Pemberwick. No one except Captain Granger, his team, and the CDC may come or go from the island.

But Tucker, Quinn, and island-girl Tori aren’t buying the official story—even though the President of the United States says on television that it’s true. Too many weird things are happening.

Why don’t Sylo and the CDC wear hazmat suits or surgical masks to protect them from the virus? Why have all communications between the mainland and Pemberwick been shut down? And why would the U.S. military chase and kill innocent islanders? Then there’s the stranger pushing Ruby, a crystalline substance that provides a temporary burst of massive power and strength. It’s absolutely harmless, the man declares, but Tucker believes Ruby killed his team’s football player.

Tucker, Quinn, and Tori attempt a daring nighttime escape from the island in her missing father’s lobster boats. Quinn sets off alone in one boat while Tucker and Tori set off in the other; both boats are headed for the mainland five miles away.

They never make it.

Instead, the trio witnesses a terrifying air skirmish between Sylo fighter jets and the black shadow crafts: Sylo loses. The mysterious crafts totally annihilate Quinn and his boat with some kind of laser beams. A Sylo submarine captures Tucker and Tori and puts them in the military detention center, erected on the site of the former country club and golf course.

The suspense ratchets up ever higher with unanswered questions. Is Sylo evil or good? Are the islanders being held in protective custody, or are they prisoners of the U.S. government? What are the black shadow crafts and where do they come from? And why are Tucker’s parents part of Sylo?

Mr. MacHale is a master of intrigue, pacing, and adventure. The plot races along and has enough twists and turns to keep readers on edge until the end. Reading Sylo is like trying to solve a mystery by glimpsing clues through the blurry windows of a speeding bullet train. Even so, many questions remain unanswered and new ones arise on the last few pages. Hopefully all will be resolved in the second book of this planned trilogy.

While the book is said to be for ages ten and up, many children of that age may not be ready for the challenging content that includes perceived parental betrayal, a best friend’s death, violent and lethal air battles between Sylo and the black flyers, the murder of apparently innocent civilians, and consumption of the performance enhancing substance, Ruby. Sylo is perhaps better left to readers who are 12 years old or more. The story is certain to appeal to that most elusive of readers: the teen boy.