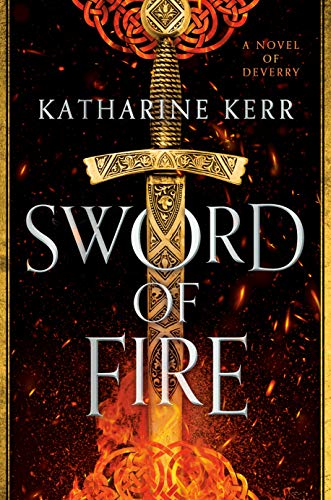 “With affable characters intelligently written, it is the world-building that sets this book apart from the usual fare.”

In a return to the word of Deverry, previously introduced by Katherine Kerr in a 15-book series, Sword of Fire stands alone from the rest of the series as the first of a new trilogy. Set centuries after the events of the first series, it can be read by itself with little to no set up for the first-time reader of Kerr’s works, or as a refreshing return to a familiar land. A blend of Anglo-Saxon, Norman, and Celtic themes, the book is an easy for the standard fantasy fan to dive on in and enjoy.

The common folk of the land are restless, protesting a corrupt legal system whose judges turn a blind eye to the depredations of the noble and the wealthy while the local lords (called gwerbrets) are unhappy with the heavy-handed rule of Prince Gwardon, the son of the High King.

The heroine, scholar Alyssa vairc Sirra, undertakes a quest to find an ancient tome that will help provide a precedent for elected judges. Joining her quest is the mercenary (called a Silver Dagger) Cavan, who protects her from mercenaries hired by the gwerbrets. This quest is merely a prelude to the troubles that occur if and when she recovers the tome.

It seems that the book is not only entertainment, but a foil against the traditional Euro-centric fantasies that have stagnant systems of government that have ossified their bureaucracy to the point that they continue on under the massive weight of their own inertia. Kerr develops a dynamic, evolutionary system that not only feels real, but makes sense in a turbulent political landscape, tackling prejudices and progressive ideas in one volume.

With affable characters intelligently written, it is the world-building that sets this book apart from the usual fare. Fresh and fun, Sword of Fire doesn’t take many risks when it comes to the fantasy genre, preferring an optimistic world filled with chivalry and renaissance intelligence. Kerr offers a renewed Deverry where they can enjoy the subtle references to her previous books. It is escapism, pure and simple, that seems to refute the popular trope of the dark, anti-hero protagonist that populates the bookshelves these days, offering people an easy, light and bright read to while away the hours.