Sword and Scimitar: Fourteen Centuries of War between Islam and the West 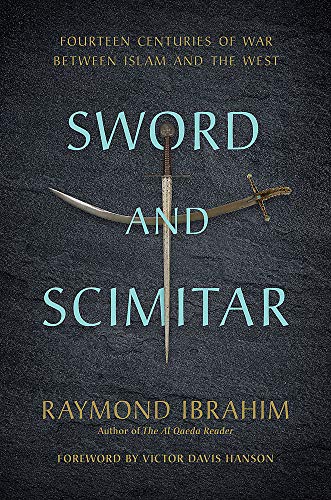 “this informative, well-written, and highly controversial book will be enlightening for readers unfamiliar with the long history of war between these two faiths. . . .”

For over 1000 years Christians and Muslims were almost constantly at war throughout Europe, North Africa, and the Near East. From the time that the armies of Muhammad swept out of the desert around 634 until the siege of Vienna in 1683, the ebb and flow of Muslim power into Christian Europe was the driving influence of this period and this struggle continues to influence politics and culture throughout these regions today.

Raymond Ibrahim presents the military history of this period by examining eight key battles fought between Christians and Muslims. This superbly written volume, making extensive use of primary sources from both sides, especially underutilized Arabic language sources, will make some readers uncomfortable with its stark portrayal of Islamic jihad, the totality of warfare and conquest, and the utter devastation of lives and property caused by the conflict between the two “superpowers” of the era.

The narrative and analysis go beyond traditional military history of reciting movements of troops to examine not only how the battle was fought, but the political, social, and cultural contributors to each battle and the armies involved. More significantly, Mr. Ibrahim provides an excellent evaluation of each battle’s historical implications, including the often-ignored perception of the battle in the memory and myth of both sides even today, which is often very different from the facts of history.

Three overarching themes in this book will more than likely trouble modern readers, and they should, as Ibrahim offers a stark assessment of jihad and the role of warfare and conquest within the teachings of Islam. Although some readers may disagree with his conclusions, his extensive use of footnotes and quotations from the contemporary viewpoints of rulers, soldiers, and civilians in all their immediacy and emotion cannot be easily dismissed.

First, warfare during this millennium was brutal and total. Ibrahim makes the point that jihad was the highest calling for many Muslim rulers and their soldiers, and nearly every year was marked by a campaign to increase the realm of Islam at the expense of their neighbors.

Once a campaign was underway, there was no regard for non-combatants or property, and the casualties incurred during these wars were almost incomprehensible, with large regions of many countries depopulated and desolated after extensive campaigns. Combat was literally a fight to the death, with no quarter given by either side. In nearly all cases, if a besieged city fell, the defenders who didn’t die in battle were usually executed and the women and children who survived the initial massacre after a city was conquered were destined for slavery.

Second, in addition to the brutality of outright combat, life overall was harsh and dangerous, particularly on the frontier between Christian and Muslim kingdoms, and sexual slavery was a fact of life, especially for any women captured either by conquest or the numerous raiding parties sent out by Muslim marauders and pirates along the Mediterranean basin.

Ibrahim offers extensive footnotes and examples of the fates of Christian and other non-Muslim women captured during wars and raids that is eerily familiar to the recent depredations inflicted on non-Muslim women captured by ISIS during their recent wars in Syria and Iraq. Prior to the European naval victory over the Ottoman Turks at Lepanto in 1571, entire coastal regions of Italy, Spain, and France were nearly depopulated by Islamic raids, with most of the populations carted off and churches plundered. These are disturbing tales related in participant’s own words that may be difficult for modern readers to truly comprehend.

Finally, as much as many modern historians try to depict these wars in the context of realpolitik or other secular concerns, Ibrahim makes a convincing case that religion was the most significant factor in the strategy and politics of both Christian and Muslim rulers of this era. This fact will be difficult for most secularized readers to understand, but the unifying factor of faith, both in the Islamic Middle East and Christian Europe, played a central role in the average person’s life and the call to defend the faith against a heretic or infidel was compelling.

Of course, this does not mean that both sides were not riven with infighting and secular power struggles. The divisions between Sunni and Shia, Persian and Arab, and brothers fighting over succession to the Islamic Sultanate were at least as bloody as divisions between Rome and Constantinople and the various kingdoms of Christian Europe. Indeed, both sides were beset by internal strife at crucial times in the narrative, affecting not only the course of some battles but the overall struggle between the two faiths.

In many parts of Europe and the Middle East these battles and their outcomes are ingrained in the culture and heritage of the country. This book offers an explanation of why these conflicts still echo in countries like Hungary, Serbia, and Poland today. In order to better understand current events in this turbulent region of the world, this informative, well-written, and highly controversial book will be enlightening for readers unfamiliar with the long history of war between these two faiths.