Sword and Pen (The Great Library) 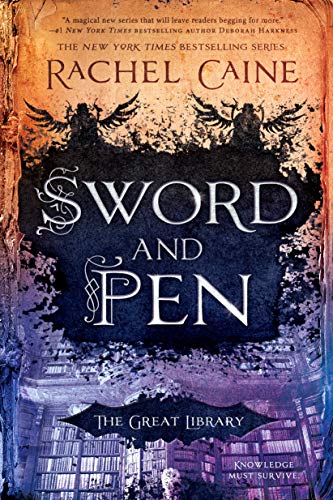 “Caine’s craftmanship is nothing short of brilliant.”

Sword and Pen is the fifth installment of Rachel Caine’s thrilling The Great Library series, set in a frightening, political, alternate world in which owning books is strictly forbidden, and what is distributed is censored through alchemy. With the future of the Great Library in doubt, Jess and his friends must decide whether saving it is really worth it.

Unlike the previous book in the series, where one who may not be familiar with the series could pick it right up and start reading, this book begins immediately after the events of Smoke and Iron. Jess is still trying to process the loss of his identical twin brother, Brendan. He wants to grieve, but quickly realizes it is neither the time nor place, when he puts himself yet again front and center in the war to protect the Great Library. Readers will find themselves connecting with Jess as he continues to pull them into the story, wishing for him to have a happy ending.

For the first time in the series, all the characters that we have grown to love are together in Alexandria, though still spread out throughout the city until the very end, when they at last, come together to finish what they started.

Jess joins Scholar Christopher Wolfe and Dario in their quest to find the old Archivist who has gone on the run and taken many followers with him, leaving the Great Library from being able to move forward without him. Unbeknown to our favorite characters, the old Archivist plans on retaking the Great Library and his previous position, but if it’s not possible, he is determined to destroy it along with the Great Archives.

The first task is retrieving some important papers from the old Archivist’s office, which nearly kills two of our favorite characters when they encounter a poisonous gas that slowly destroys the inside of the body and to the Medica’s knowledge, has no cure.

This is not the only conflict these characters will initially meet head on in this book. The newly elected Archivist will have to deal with navies from other countries such as Spain, Russia, and Japan, which at first act like they want to help protect the Great Library, when truly they are only there to take it and the riches the Great Library contains for themselves. This eventually leads to a spectacular battle on the sea, with help from Morgan and Thomas.

The novel is broken up into 17 parts, each told from a different character’s perspective. These characters include: Jess, Khalia, Glain, Santi, Thomas, Wolfe, and Morgan. Because these characters for majority of the book are spread out throughout the city, the switching of narratives becomes very disjointed and sometimes hard to follow. A few chapters could have been moved around and presented in a different order, which would have brought a better balance and understanding. This would have been especially helpful with the storyline involving Glain being attacked by a robotic animal, which is presented to Thomas by the old Archivist via a mirror long before the event actually happens.

This is also the first time the readers get to see these characters fully fleshed out and developed. Morgan, the most intriguing character, has become a very powerful Obscurest. Thomas, who originally was shy and uncertain of himself, has become confident on robotic building that is as genius as the famous Heron. This is definitely true when he must tackle on the traps found in Heron’s tomb. Khalia has become the newly elected Archivist, yet Jess is the only character who feels left behind, lost in this world without a purpose.

“In this world today where knowledge is everywhere and yet nowhere . . .”

Rachel Caine manages to take you on a 368-page roller coaster full of intrigue, suspense, anxiety, shock, heartbreak, and relief. Caine’s craftmanship is nothing short of brilliant. Just when the reader believes they understand where the story is going, there’s a twist and turn waiting around the corner.

The series conclusion is both bittersweet and satisfactory, yet leaves the door open for possible future revisits by the author. Perhaps a short story collection may appear down the line.

Overall, this series will pull at a range of emotions; it will make the reader feel angry, sad, cheerful, scared, while enduring several sleepless nights. It would be unjustified if this brilliant series should not find a future home on TV screens worldwide. It is a series that readers of the young adult genre will not want to miss!

Mackenzie Flohr is the author of The Rite of Wands series, a gold medal winner in the 2018 Literary Classics Book Awards for Fantasy.