Swinging Away: How Cricket and Baseball Connect 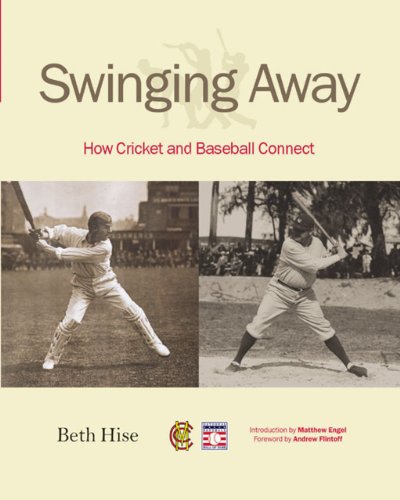 The question that the title of this book inspires—Did baseball grow out of cricket?—receives a clear answer here: no, the two games are “sporting cousins.”

Even though they are separate games, baseball and cricket, before they became large commercial enterprises, once co-existed amicably in 19th century America, when baseballers and cricketers played each others’ sport. George and Harry Wright, of early baseball fame, were cricketers before they were baseball stars and continued enjoying their British sport even while helping develop American baseball.

But in North America of the 1850s, baseball pulled ahead in popularity. Many Americans considered cricket dull, suitable only for aristocratic snobs, and so slow that a critic joked that it must be “played on the installment plan.”

Americans developed their game of baseball into one featuring aggressive hitting, snappy fielding, and speed, speed, speed. They hardly appreciated cricket’s leisurely pace, played in a land with a much larger percentage of men who did not need to work.

And with the Americans’ formation of a game in which sign-stealing, beanballing, and doctoring the bat or the ball became common, how could they grasp cricket’s spirit of comradeship and fair play? This spirit remains more important in cricket than winning. Cheating in the British game would be “bad form,” simply “not cricket.”

Although the tone of baseball is different from cricket’s, this book, in comparing the two games, emphasizes their similarities as well as explaining the way their development has diverged. The author compares and contrasts the evolution of the games’ uniforms, their equipment and styles of play, even their similar passion for quantifying and comparing performances by means of numbers; keeping score is a way for fans to take part vicariously. Author Hise reveals little-known facts, like the origin of the term “score” in cricket, where originally scorers kept a tally of runs by notching them onto sticks—scoring the sticks.

Sidebars in the book include neat biographies of persons important in either baseball or cricket, such as W. G. Grace in cricket (he of the massive beard) and A. G. Spalding in baseball, who advanced from player to owner to sporting goods magnate. Another person of influence described here is Henry Chadwick, a crossover figure who loved cricket but after seeing an exciting baseball game decided that baseball truly reflected American values.

Henry Chadwick spent 50 years reporting on and helping to shape American baseball, affecting rule changes and warning against gambling. Chadwick’s influence is still felt today: the Society for American Baseball Research has this year instituted The Henry Chadwick Award, to honor the game’s great researchers—historians, statisticians, analysts, and archivists—for their contributions to helping see baseball as a game that links its present with its past.

Swinging Away features an unusual collection of rare photos, many picturing curious items from cricket and baseball never before seen in any book. That’s because the book represents a companion piece to an extensive exhibition, one being shown in London, England, at famous Lord’s Cricket Ground. In 2011 this exhibit will travel to the National Baseball Hall of Fame and Museum in Cooperstown, New York.

The book that resulted from this exhibition became a volume that is itself a collector’s item: a thorough and fascinating history in the form of a gorgeous coffee-table book, its many images printed on slick paper that show off the colors and shapes of curious bats, of old-fashioned uniforms, and of women playing cricket in 1779-style hats that seem about to fly off their heads. The author often cleverly juxtaposes images from the two sports that show differences as well as similarities.

As the curator of the exhibition at Lord’s and someone who knows both sports well, Beth Hise must surely be the best possible person to produce this book. Her extensive research shows complete understanding of both games. An American (and a Cleveland Indians fan) living in Australia and writing about an exhibit she curated in London, Hise reflects an international outlook. Because of her original interpretation of informative objects and images, her book supersedes George Kirsch’s 1989 history, which also compares the two sports. My own single visit to the revered Lord’s Cricket Ground in London made me aware only that understanding cricket is best left to the British. Now I have a better grasp of the game.

Hise makes it clear that baseball originated not in Cooperstown, not even in North America, but in Britain as a British children’s pastime. She also demonstrates the surprising fact that after baseball won out over American cricket in the 1850s, cricket continued to influence baseball up to the early 1900s, primarily through the great numbers of players playing both sports simultaneously.

Perhaps the most fascinating sections of Swinging Away are those that reveal some of the little-known overlaps between baseball and cricket. We can all delight in chancing upon a photo of the Hollywood Cricket Team of 1936, featuring people of British origin such as C. Aubrey Smith, Nigel Bruce, and Errol Flynn—the last two smoking their pipes.

They all look as though they’ve been having a jolly good time!