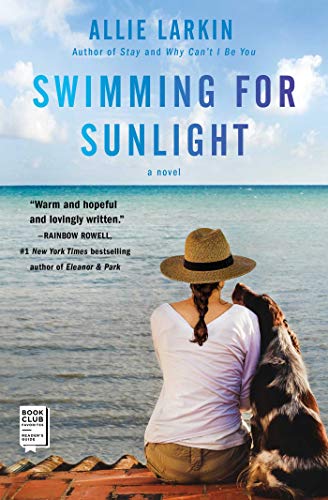 Katie Ellis, who is divorcing her cheating husband Eric, is shocked when he brings his "friend" to the lawyer's office. Katie previously suffered two miscarriages, making her deeply depressed, and she thinks this caused the end of her marriage, but she never dreamed Eric would be unfaithful. Now all she desires from this dissolution is her rescue dog, Barkimedes—Bark for short—and gives up her share of assets to keep him.

The papers signed, Katie collects a few meager belongings and Bark, leaving her Rochester, NY, home to head to her grandmother's home in Port St. Lucie, Florida, where she grew up. At age nine, Katie and her dad had been swimming in the lake when he took ill. She helped pull him onto the dock but had to leave him there during a storm to get help; he died.

Her mother either "paid me too much attention or looked past me like I didn't exist," so two years after her father's death, her mom decided to move to Costa Rica, and Nan, her paternal grandmother took her in, offering unconditional love. After all these years, Katie is tormented by her beloved father's death and blames herself for not saving him. She is still is petrified of the water, though she always loved to swim.

When she arrives at Nan's, she's happy to be "home" and finds her old room the same as she left it. Nan and her cronies welcome Katie with open arms, though she worries how Bark will adjust for he, too, suffers his own phobias, making Katie overly protective of him.

Mo, Katie's childhood friend is ecstatic she's back so they celebrate, over-imbibing, and the following morning Katie wakes hung over only to find Nan's house is overflowing with her friends. Not wanting them to see her in her present state or to deal with questions from Eric, she goes jogging:

"Even though I hadn't jogged, or exercised in any consistent way, for the entirety of my marriage, I'd hoped my muscles had excellent memory and I'd magically get back to running without the awkward walk/jog state. I started off strong, tearing down Southeast Dolphin Road at what felt like a respectable pace. It was only five houses worth of distance, but I was crushing it, even with a hangover.

"I stopped to wait for a car so I could cross the street, and when I tried to pick up speed again it was agony. My body warmed up and was telling me to fuck off. My fat hurt; thighs swooshing and crashing with every step. Muscle memory counts for jack shit when everything jiggles. I ran harder than my lungs could handle and stopped at the end of each street, holding the stitch in my side, gasping for air, until I had enough breath to take off again. The sweat made my skin itch. When I scratched my legs, welts appeared in the marks my nails left.

"I saw Mo from across the street, sprinting like a gazelle in short shorts and a sports bra, unaffected by the tequila."

Katie is happy to reconnect with Nan's friends but knows she should think about what to do with the rest of her life. When living in New York, she worked at the local theater designing and sewing costumes, and remembering her old job as a teen working for Isaac—a dressmaker and tailor—she is able to get her old job back.

Nan and her neighbors are planning a fundraiser. She tells Katie about her younger days when she and friends performed locally as mermaids. Instead of a boring bake sale to raise money, someone suggests the ladies reconstruct their act, using underwater pictures in the calendar. Who better to design and sew their outfits than Katie?

However, the thought of being around water petrifies Katie. She contacts her college friend, Luca, who creates documentaries for suggestions. To her amazement, he wholeheartedly offers to help. Katie reminisces about when they were together and wishes she hadn't let him go. Though close, she believed she was no good for anyone because of her erratic emotions.

As Katie settles in her anxiety plagues her especially about Bark, afraid he will have a meltdown, too. The canine is her comfort zone and she believes she is for him, but when everyone fusses over him he becomes more playful and happy. Katie is glad for this but worries she's losing her comforter.

Swimming for Sunlight is an apt title for this insightful novel, which contains humorous selections to keep it light and fast moving. Katie's traumatic past almost paralyzed her and transmitted her nervousness to Bark, too. Thanks to those on her side, she and Bark confront their fears.