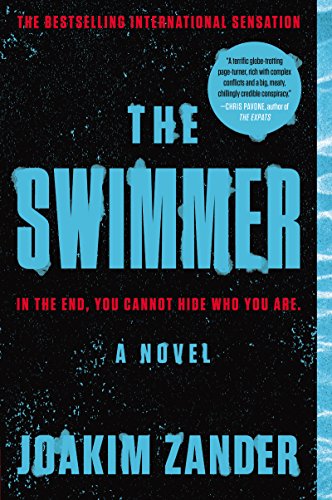 Author Joakim Zander’s writing style in The Swimmer is difficult to describe. His word choices and sentence structure pull the reader into his scenes and hold him there, turning the page, and the next, and the next.

It is clear that he ponders over every word, every phrase, every sentence. The words he chooses are designed to paint a specific picture; it might be one of conflict, or pain, or anger, or deceit, but Zander has used all the right pigments on his chosen canvas to create the suspense and tension needed for a thriller. His word choices give him the ability to create tension and conflict within and among his characters, leaving the reader with a strong desire to know what will happen next.

And yet it seems as if there is something missing, something the reader can’t quite wrap his arms around. Perhaps it is that The Swimmer is more character-focused than story-focused.

If one were to pick out Zander’s strengths and weaknesses, it can clearly be said that his vocabulary is strong and he chooses strong, active words to create tension, describe settings, and develop characters.

Zander does an admirable job of describing his bevy of major characters: George, Klara, Mahmoud (“Moody”), and the mysterious “father” as the front-runners, and a list of other dark characters swirling around the majors. Their strengths and weaknesses are clearly spelled out, and he provides a rich visual description of each.

The title of the book would lead the reader to think that this character would be the protagonist, but that does not prove to be true. The “swimmer” is just a minor character, whether you want to believe it or not, who happens to be a CIA agent with a connection to the female lead, who is also NOT the protagonist. If the title character were left out entirely, it would make little difference to the story. The tangle of characters without defined roles is disconcerting when looking for a protagonist and an antagonist. A protagonist and antagonist identified early on would have resulted in a smoother story flow.

And therein lies his greatest challenge. Zander starts out with a strong hook: a scene set in Damascus, Syria in 1980, where a car bomb kills the wrong person while the intended victim watches in horror. A mother dies, a father escapes, and a baby daughter is left to be raised an orphan by grandparents. The opening is well crafted, written in the first person, present tense—a point of view designed to sweep the reader into the story.

From there, the story becomes a little muddled, strong word usage notwithstanding. The story moves backward and forward rapidly between the last years of the 20th century, the first years of the 21st century, and the end of 2013; and then it seems to get lost in the transition. The flow of the story is bumpy. To add to the confusion, Zander focuses on many characters in short chapters and moves from first person to third person, present tense to past tense point of view, which tends to be jarring.

Set as a terrorist thriller, the story is vague about what exactly the problem is, and in several instances the chase scenes are almost set up as conveniences. The reader does not know up front what the central problem is so he does not know what Klara, or Moody, or George are running from or to.

Chapters appear as if streams of consciousness; initially, the story seems to have little or no direction. The movement back and forth through decades is confusing and cluttered. It’s as if the story started at the wrong spot. It is not until the middle when the chase is on, with Klara and “Moody” fleeing across Europe to escape capture by several murky characters [the reason for the chase still not entirely clear at this point] that the story moves rapidly, and Klara becomes more of the primary character.

It appears that Zander has chosen to keep many important items hidden or only hinted at to be exposed at the end of the story. It feels as though there is not enough information provided to the reader to help understand the situation or to discern what is happening.

While the story issues are problematic, Zander has the skills to take his writing to the next level, perhaps with stronger story focus.