The Sweetness of Water: A Novel 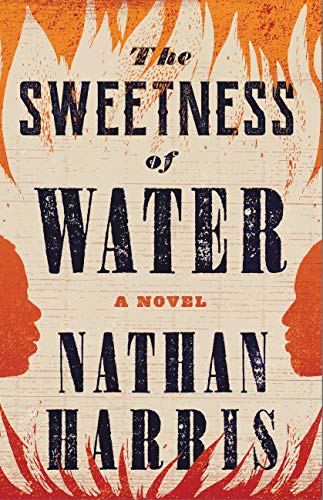 “In a tumultuous time of instability and uncertainty, Nathan Harris brings to the foreground humanity’s aptitude for survival, compassion, and goodwill even in their darkest hour.”

Soon after the Emancipation Proclamation becomes law, George Walker, an unconventional landowner, is out on one of his many forays searching in vain for the strange animal he’s seen since his childhood. Gone all day, he has become disoriented, and with a bothersome hip compounding his situation, his ability to make his way home on his own becomes doubtful, until he happens upon two newly freedmen, brothers Prentiss and Landry, who are camping in his woods.

“Prentiss explained then what little he had been holding back: that they had departed from Mr. Morton’s a week ago; had taken what little they could carry on their backs—a sickle left in the fields, a bit of food, the bedrolls from their pallets; and had not made it any farther than where they stood now.”

The brothers opted to leave the huge plantation that adjoins George’s land, where they were once enslaved, and in the few days since, they have been trying to figure out what to do next. Prentiss is protective of his brother, Landry, a towering man who only speaks when it’s an absolute must, and who is motivated by food. Traumatized by torturous abuse at the hands of his previous owner, Landry long ago elected silence, and through it, discovered his own sense of freedom.

George’s reaction to the men is more curiosity than anything, and after they help him get home, he begins to consider an idea, sprung from grief. George, and his wife, Isabelle, are each trying to cope with the loss of their only son, Caleb, who has been killed while fighting in the Civil War. Their sorrow has beset them in very different ways, and for George, it’s having a change of heart about what to do with his land he’s allowed to lie fallow for years. The brothers could help him, and he would pay them an honest wage, like any other man.

“I mean to make use of this land. I have to if I’m to make enough money to keep it. But I would need some help. I’ve given it more thought than you might imagine.”

At first, Prentiss refuses. He’s just escaped a life of toiling for a white man, and he’d rather not begin again so soon after having a taste of liberty. If it weren’t for George’s apathetic demeanor, he would have had nothing to do with him. A bit of a back and forth begin until each realizes one can be useful to the other. Prentiss and Landry will work with George, get paid, and through this comes not only an unexpected friendship, but a way for the brothers to pursue a future for themselves.

Meanwhile, Isabelle acts as if George being the bearer of the bad news about Caleb is at fault for his death, and chooses only to speak to her good friend, Mildred. George is baffled and hurt by her refusal to acknowledge him. The one thing agreed upon, reluctantly by Isabelle, is George transforming the unplanted land into a peanut farm.

“Only at the moment did she deign to look in his direction. ‘How is this different from anything else? You’ll do as you will, and I will do as I will, and we will tolerate whatever comes of it.’”

But the story takes a surprising turn early on when an event brings about an unexpected, temporary joy for George and Isabelle. This revelation becomes the means in revealing a forbidden secret that will ultimately cause a murder and create division in the Deep South town of Old Ox. Here, where residents are already reeling from the aftershock of Union occupation, where they are being forced to consider a new way of life, the phenomenon of newly freed slaves, and where the secret becomes the one more thing that propels certain individuals to take actions that cannot be undone on multiple fronts.

Harris’s characters are multifaceted, absorbing, and extraordinarily well-developed. They transport the reader into a difficult time of complex social problems, with situations that elevate the tension with each turn of the page. As more layers of the story unfold, Harris’s captivating and shrewd prose dissects individual motives, revealing vulnerabilities and thereby exposing the characters for who they are, and what they have become.

Harris creates a fascinating and compelling look into the Civil War era by taking a well-known aspect of the period, the Emancipation Proclamation, and candidly depicts the confusion in the aftermath of the new law on slave owners, and the slaves themselves. In a tumultuous time of instability and uncertainty, Nathan Harris brings to the foreground humanity’s aptitude for survival, compassion, and goodwill even in their darkest hour.