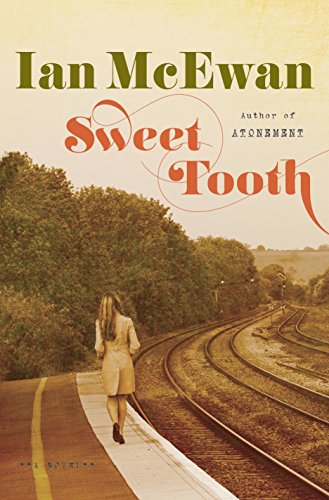 “Sweet Tooth is wonderfully misleading, absolutely delectable, and very smart. And it is still a love story.”

Like even the less than stellar films of the prolific and talented Woody Allen, Ian McEwan’s less than wonderful novels are still pretty good. But, Ian McEwan fans, fear not. Sweet Tooth does not disappoint. It is one of author McEwan’s finest, sharpest, and most engaging novels in years.

Sweet Tooth is difficult to categorize. On the surface, it appears to be a tale involving espionage and intrigue complicated by romance. It is also a period piece that depicts Cold War Britain in the early 1970s.

Serena Frome, the female protagonist, is recruited to MI5 after graduating from Cambridge and assigned to enlist and monitor a writer, Tom Haley, for a secret operation named “Sweet Tooth.” The goal of the project is to promote and fund writers whose politics align with those of the British government in Cold War England.

Mr. McEwan does a superb job of capturing 1970s London, including the gas shortages, economic problems, and general malaise. Serena narrates: “Everyone had gone mad, so everyone said. The archaic word ‘strife’ was in heavy use in those rackety days, with inflation provoking strikes, pay settlements driving inflation, thick-headed, two-bottle-lunch management, bloody-minded energy crises and power cuts, skinheads, filthy streets, the Troubles, nukes. Decadence, decay, decline, dull inefficiency and apocalypse. . . “ He also constructs an utterly engrossing, intricately and brilliantly-plotted spy novel that illustrates the paranoia and intrigues of MI5.

However, Sweet Tooth is not what you expect. It is truly a novel about writing and story telling and fabrication and the intersection of spying and telling tales.

Despite studying math at Cambridge, Serena is recruited to MI5 and chosen for Sweet Tooth because she is a speedy and voracious reader. The novel questions Serena’s reading skills, particularly her preference for books that pertain to her own experiences and desires.

She explains: “I was the basest of readers. All I wanted was my own world, and myself in it, given back to me in artful shapes and accessible form.”

She believes that there is “an unwritten contract with the reader that the writer must honor. No single element of an imagined world or any of its characters should be allowed to dissolve on authorial whim. The invented had to be as solid and as self-consistent as the actual. This was a contract founded on mutual trust.”

Sweet Tooth is skillfully constructed of stories within stories and voices narrating other voices. Serena’s narrative includes excerpts, descriptions, and paraphrases of Tom Haley’s stories that are so smoothly narrated and linked that it is impossible to distinguish Serena’s voice from Tom’s.

For instance, Serena narrates Tom’s dystopian novel: “This plaza, where much of the central section of the novel takes place, is a giant microcosm of a sad new world. In the middle is a disused fountain, the air above it is grey with flies. Men and boys came there daily to squat on the wide concrete rim and defecate. These figures perch like featherless birds.”

All of Serena’s synopses of Tom’s writing include italicized sections suggesting that she is quoting directly from his texts or emphasizing particular passages. Either way, their narratives are interwoven.

Not only does the narrative include Tom’s short stories, it also incorporates newspaper articles and letters, concluding with a letter that frames the novel perfectly. Mr. McEwan creates numerous credible voices from Serena’s and Tom’s to those of the secondary characters and even the unnamed authors of the mock newspaper reports and reviews.

Sweet Tooth is hard to review without giving away too much of the plot and divulging too many secrets. This review has both mislead the reader and provided quite a few hints. Enough said. Sweet Tooth offers twists and turns, false leads and gentle hints—all in a cleverly constructed plot rivaling the intricacy of some of Dickens’s works.

Sweet Tooth is wonderfully misleading, absolutely delectable, and very smart. And it is still a love story.