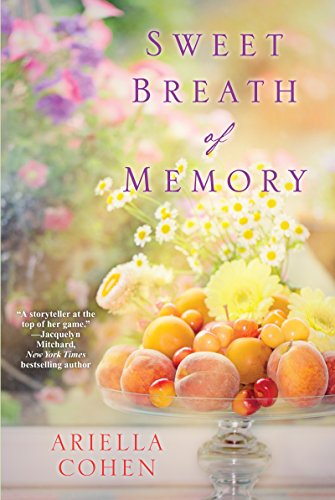 Cate Saunders is despondent, but more than that, she is angry. Her husband John, sent to Iraq after joining the National Guard, dies in action, and the government will not offer any details. Now, two years after her loss, the home she and John hoped to live in forever gets foreclosed. She is unable to find gainful employment as her only viable working asset is as a writer, a profession in which John supported her wholeheartedly while depending on his income.

Help comes by way of acceptance into a caregiver program located in the western Massachusetts town of Amberley, many miles from Cate's current home. With trepidation, she arrives in this picturesque burg and is welcomed by the residents.

Sheila Morazzo, the owner of Vitelli's Grocery, senses Cate's anxiety upon her arrival, and she graciously offers her the apartment above her establishment at a ridiculously low rate.

Mariam Rosen, a survivor of the Holocaust, once occupied the dwelling, and Cate stumbles across what appears to be entries from a chronicle Mariam wrote long ago. Cate's interest is piqued, and she feels less alone in her grief.

Helen Doyle, the nurse trainer takes Cate under her wing, finding her to be an able and caring assistant. Her first patient is the elderly curmudgeon Beatrice McLean, who surprises Helen by befriending Cate, imparts the history of the town and how her department store saved it during the 1930s and 40s.

The Amberley Diner proprietor, Gaby French possesses a sixth sense. She knows not only what her customers want to eat, but is empathetic to others’ needs and emotions.

The Veterans of Foreign Wars of Amberley sponsor a "First Novel Contest" to unpublished novelists to submit a 100,000-word maximum book addressing the civilian legacy of war. The women know of Cat's passion for writing and urge her to enter the competition.

Though a fictional depiction, Cate weaves parts of Miriam's past from journal pages which mysteriously show up at her apartment. Cate connects with her new friends as they share their heartache with stories of their casualties of combat, assuaging Cate's limited information of John's demise. She later learns events of his death that confuse her, making her wonder if she even knew her husband.

Cohen's flair with prose is evident throughout the book. Her quintessential imagery shows in several instances, such as: "yet memories were armor. That armor didn't shield her from sadness, for that was as constant as the rising sun. But it did keep the chill wind of despair from snaking its way toward her heart."

Cate interviews each of her friends and is intrigued by Helen's reminiscences of a conversation with Mariam, who was close to Helen's mom. Helen imparted Mariam's description of grief as such: "the mind is like a series of rooms. There's a parlor we live in every day and sweep clean. There there's a back room we only visit when we need to; that's where we keep memories of family we've lost and dreams that are dead. And there's a locked room where we put selfish thoughts we don't want anyone to see. Not even God. Now the last room is one we wish we could forget exists, for it holds echoes of all the horrors we've seen."

Sweet Breath of Memory is so well written it is unfathomable that this is a debut novel.