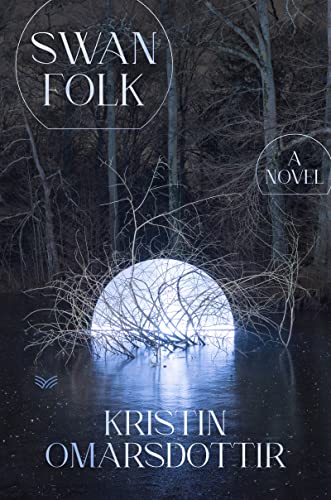 “The narrative, and its narrator, remain elliptical to the final page.”

This Icelandic novel takes the reader into the near future of an unnamed, totalitarian society, where the main character, Elísabeth Eva, works for a “Special Unit” that monitors everything from stand-up comics to the sexual activity of young women. On a walk outside of town, she encounters the swanfolk: creatures with the lower bodies of swans and the upper bodies of humans, who precipitate many strange events for the narrator.

In The European Folktale: Form and Nature, Max Luthi notes that one of the characteristics of European folktales is how characters react to encountering the supernatural—or rather, how they don’t react. A fairy-tale protagonist may be worried that a lion will eat her, but the fact that the lion talks is not remarked upon. Some of this quality is found in Ómarsdóttir’s novel, where the employees of the Special Unit are more concerned with locating and analyzing the swanfolk than with the question of how such creatures could exist.

This muted approach to emotion, however, goes well beyond the supernatural. At various points, Elísabeth Eva attributes her lack of affect to her background, claiming (for example) that “I had been trained in such a way that eliminated the fear response from my nervous system.” Her interactions with her fellow humans are often every bit as peculiar as those with the swanfolk—on both sides; people seem oddly prone to physical assault for very small justification.

Conversations in this novel are often highly stilted, filled with non sequiturs and philosophical declarations. The narration is much the same, pausing mid-dialogue to note the clothes someone is wearing or the bandage on a waiter’s finger. As the novel goes on, the effect becomes increasingly surreal, and increasingly alienating: Hardly anyone seems to behave like a human, be they Homo sapiens or swanfolk.

The swanfolk themselves do have a relatable side. They’re not sure where they came from, their older generations having died; they’re also having difficulty reproducing, such that they face the prospect of their own extinction. (Given the connotations of youth and virginity evoked by the term “swan-maiden” in English, it’s a delight to see them more often referred to as “swanbroads.”) Their periodic violent turns toward Elísabeth Eva, however, may be off-putting to readers, especially when the narrative swerves into sexual violence near the end of the novel.

But any evaluation of the swanfolk must contend with the question of how reliable of a narrator Elísabeth Eva is in the first place. Early on, after her first encounter with them, she goes directly to the hospital to have her head examined—an outwardly realistic response, even if her inner state remains distant and alienated. She’s given a clean bill of health, but later in the novel, one of her co-workers turns abruptly against her, saying “You don’t know how to enjoy yourself. You’re a human aberration . . . you basket case.” The question of where the weirdness of this tale lies—with Elísabeth Eva, with the world around her, or both—is not easy to answer.

Despite the stiffness of the text overall, the prose does hold some beauty. A note from Vala Thorodds unpacks some of the decisions she made in translating Ómarsdóttir’s work, with particular attention to its poetic aspects. The sporadic breaks in conventional formatting, such as listing each in a series of colors on a separate line, are too occasional and random-seeming to carry much impact, but here and there the metaphorical language strikes a beautiful note, as when the narrator describes opening the curtains in the morning as “[tearing] the seal between day and night.” Other moments veer into pretension: “Selma climbed out first, Helgi followed me, nodded to the driver, the door shut v e r y slowly and my closeness to the car turned all too quickly into a fictive distance that, like the closeness itself, could never materialize, no promises.”

The cover copy for this novel promises that “Ultimately, [Elísabeth Eva] is forced to reckon with both the consequences of her involvement with these unusual beings and her own past—and face a truth she’s carefully tried to evade.” Readers expecting those consequences or Elísabeth Eva’s past to take center stage, however, will find themselves adrift. The narrative, and its narrator, remain elliptical to the final page.