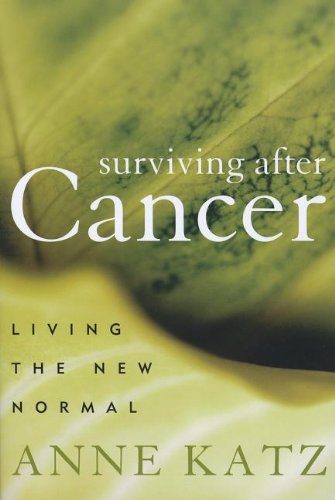 In Surviving After Cancer: Living the New Normal, Anne Katz provides ample evidence that cancer changes everything. She identifies several major hurdles that often linger long after therapy ends. Each one is presented through the eyes of a survivor who overcame it and is now “living the new normal.” A cancer survivor reading this book may not have personally experienced all nine hurdles, but he or she will certainly identify with several.

A fear of cancer’s recurrence, for example, is a common hurdle. It is a barrier to wellness for many. For them, this fear never leaves. Instead, anxiety or physical sensations of lurking danger persist long after their treatments have ended. Yet survivors are reluctant to complain or seek help because they consider themselves lucky to be alive and don’t want to appear weak.

Other survivors cope with depression caused by letting go of the relationships they formed during their cancer care. They find themselves returning home to empty days and weeks of recovery and are deeply saddened.

In Ms. Katz’s account of a real patient facing this hurdle, a Mr. Jamieson, nicknamed “big guy” during his chemotherapy, finds himself crying uncontrollably after being discharged. When a psychiatrist recommends antidepressants and counseling for his emotional distress, he admits he has never taken head meds before, but as the first pill goes down his throat, he says a silent prayer “that it would work, that he would feel better, that he could get on with his life.”

Treatment-related fatigue is another hurdle that tries the patience of many survivors. It also commonly persists long after cancer therapy. Survivors may be surprised to hear that establishing a pattern of regular exercise, while sounding counterintuitive, actually improves cancer-related fatigue.

An after-cancer hurdle that often sparks bitterness or feelings of rejection or estrangement between couples involves a more intimate problem—a survivor’s change in attitude toward sexuality. Ms. Katz explains that, regarding this hurdle, it is important to get help for both the patient and the partner. She goes on to bluntly clarify: “Sex therapy usually involves talking about the problem and figuring out what might help. It does not involve nudity or having sex in front of a counselor.”

While cancer most often occurs in older people, for those who face it in their youth, fertility after cancer is another major hurdle. Ms. Katz shows survivors that this barrier to a “new normal” should not be suffered in silence. Again, professional help can overcome lingering effects of cancer care.

Another hurdle for many survivors—particularly ones for whom a former bad diet may have led to their cancer—is the need to make major changes in patterns of diet and exercise going forward. Ms. Katz provides well researched evidence about the need for survivors to eat a varied diet of plant-based foods and whole grains and to increase their exercise. She realistically suggests that survivors cut down on—not eliminate—animal fat, salt, sugar, alcohol, and smoked or pickled foods. She encourages exercise that is reasonable for the patient’s heart health, but also cautiously recommends an oncologist-approved exercise plan.

Therapy-related effects on a patient’s memory may prove confusing to dissect out in older patients because memory issues go with the territory of aging. “Chemo-brain” is different, though, as Ms. Katz effectively captures by telling the story of a nurse who tried to return to work while experiencing cancer-related cognitive changes. Therapy-related effects impaired her visual memory and made her unable to stay focused during patient-related meetings. These effects were improved by after her oncologist changed her adjuvant therapy.

So living well in the “new normal” after cancer therapy is possible. It just requires planning. Anne Katz recommends a survivorship care plan. She shows the need for this through another survivor story: a young woman training to be a nurse who seeks more information about her own childhood cancer. Her parents hand her the survivor plan that was given to them when they left the cancer center. It described all her past treatments and told her which follow-up tests and doctor visits she would need to schedule in the years ahead.

Surviving After Cancer: Living the New Normal is a very well organized book. It is written to help survivors and their families, and it does an able job at that. All advice provided is backed by solid research. And the patient stories make it easy for survivors to identify with many others who are also living the new normal.

This book is a good resource for cancer patients at all stages of their illnesses. A newly diagnosed patient can read it and anticipate what may happen after therapy. A survivor recently discharged from care can read the sections that coincide with the hurdles they are encountering, and family members can do likewise.

Using the excellent information and resources that Anne Katz has assembled here should make the cancer journey a smoother one with fewer detours. It may also improve understanding among family members who live with the survivor.