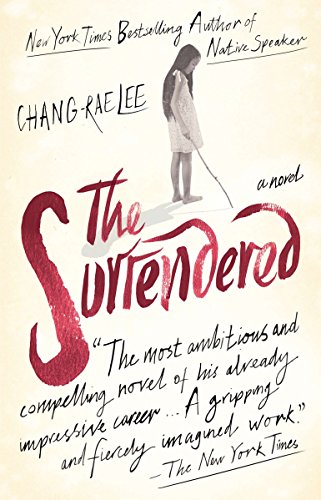 Chang-Rae Lee’s novel, The Surrendered, is an ambitious work that explores, through the intersecting lives of three main characters, the effects of war and intense traumatic experiences. Lee’s astute, psychologically rich, complex, well-developed, and well-written novel is engrossing but also terribly disturbing.

The narrative of The Surrendered shifts back and forth in time and place from Korea in 1950, to New York and New Jersey and Italy in 1986, to Manchuria in 1934—focusing on the experiences of June, the sole surviving member of her family during the Korean War; Hector, a Korean War veteran; and Sylvie, a missionary’s wife who works at an orphanage in Korea.

Each character is severely traumatized: June by the loss of her parents and siblings and her own near starvation; Hector by the death of his alcoholic father and his wartime experiences in Korea; and Sylvie, by witnessing her parents’ brutal murder in Manchuria.

The novel begins and ends with June, who is dying of cancer, and wishes to find her estranged son in Italy before she dies. The multiple, weighty stories of each character and their interactions with each other gradually unfold, like a mystery, throughout the course of the novel.

The third-person narrator, though omniscient, subtly allies with each of the main characters, which makes these deeply flawed, damaged people sympathetic. For instance, in describing June’s less-than-attentive parenting of her son Nicholas, he explains: “Not taking pictures of Nicholas was neither a conscious nor an unconscious choice; it signified nothing, revealing only the fact that she rarely had much time back then for anything but the most basic parenting. She was a young single mother with a fledgling shop during a period in New York when the economy was dismal.” While seemingly just describing June’s situation, the narrator subtly includes June’s point of view or rationalizations about her maternal shortcomings, which helps the reader to sympathize with June.

Lee’s in-depth, detailed examination of the effects of intense trauma also causes the reader to care about his characters despite their defects. Lee brilliantly illustrates the different ways in which Post Traumatic Stress Disorder (a term he does not use) manifests itself in physical ailments like June’s stomach cancer, addictions, and other self-destructive behaviors, and the effects of their traumas on their spouses, children, and other relationships.

The narrator, again, taking on some of June’s perspective, writes that “she wondered whether an objective observer would determine that on balance she had been the most damaging person in his [her son’s] life.” Lee’s examination of trauma is in no way facile, but rather reflects a sophisticated understanding of how people can be irreparably damaged.

Lee’s spare, clean prose, almost journalistic in places, prevents The Surrendered from becoming too painful to read or sentimental. In describing a particularly brutal torture scene, Lee writes, “The officer said, ‘Open your eyes. All of you,’ and then, without a word of warning, he shot Mrs. Lum in the head. She fell heavily over her husband’s body. Part of her face was missing, the wound a mass of jammy, out-turned flesh. She stared into space as if she were about to say certain words to the rest of them.” While blunt, graphic, and certainly disturbing, Lee’s illustrations of war, murder, and torture are never prurient or gratuitous.

Although rarely lyrical, Lee does diverge from his more prosaic writing to include more metaphorical descriptions as in the passage in which he describes June on a train with her siblings: “Instead her mind rode alongside itself in a state of animal vigilance, such that she could see the three of them nestled in the dull gray wrap of the blanket, their heads and feet tucked inside so that it looked like some huge spider’s or moth’s downy egg sac affixed on the boxcar, placed so that it might travel freely and survive. These last of their kind.” Lee’s clean prose, enhanced by a perfect simile, beautifully illustrates June’s situation.

Unfortunately, the last third of the novel, beginning with June’s and Hector’s trip to Italy, is not as successful as the earlier parts of the book.

There are a few too many improbable situations and plot twists, and the narrative is at times overwrought bordering on melodrama. The all-too-convenient deaths of two fairly minor characters smoothing the way for June and Hector to travel to Italy is unbelievable.

Also the endless, detailed descriptions of June’s cancer-ridden body and her suffering, as well as Hector’s self-hatred, and Sylvie’s self-destructiveness are difficult to read and become excessive. Most of the novel is so effective precisely because of its lean prose and straight-shooting narrative. The final parts of The Surrendered don’t quite do justice to what preceded it.

Despite its flaws, The Surrendered is a very smart, comprehensive, sophisticated, and moving novel.