A Surprised Queenhood in the New Black Sun: The Life & Legacy of Gwendolyn Brooks 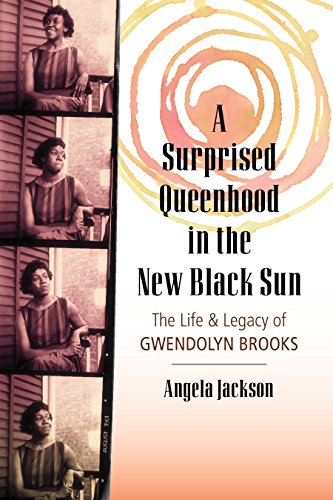 Angela Jackson’s biography A Surprised Queenhood in the New Black Sun: The Life and Legacy of Gwendolyn Brooks comes on the eve of the 100th anniversary of Brooks’ birth. The author brings fresh perspective to Brooks’ achievements as a leading black poet-activist of her generation and beyond. Jackson, a prolific poet and novelist in her own right, is among many of young poets that Brooks’ mentored during her remarkable 60-year career.

Brooks was born in Chicago, started writing poetry in her childhood, and her parents, David and Keziah Brooks, viewed her as a child prodigy. Her mother predicted that she would be “the lady Paul Lawrence Dunbar” who was the most celebrated African American poet of the era.

Brooks’ poems first appeared in appeared in the Chicago Defender and soon in national African American newspapers and magazines. As a teen, Brooks was a member of the NAACP Youth Council. Increasingly the issues of racial injustice against black America became central themes of Brooks' poetry.

Brooks met and fell in love with fellow poet Henry Blakely and despite early literary success, Brooks had to work as a secretary and writing radio scripts to make ends meet. They had two children, Hank and Nora, were both working full time, but still not making enough money to survive.

In 1945, Brooks’ first volume of poetry A Street in Bronzeville was published and her career took off. Jackson calls Bronzeville “a love affair with black Chicago” about life and people in her neighborhood. Among her many fans were leading poets and writers of the era including Langston Hughes and Richard Wright.

Her second collection Annie Allen focused on the experiences of a young black girl as she grew into womanhood in Chicago. Brooks muses on such serious issues as racism, classicism, sexism, and being dark skinned, and the undeniable realities of intra-racial colorism in her own community. Brooks’ editors at Harper & Sons wanted her to tone down her “newsreel” style in writing and instructed her to be more “universal” and not write exclusively about African Americans.

Brooks made some adjustments, but essentially stuck to her literary vision for the book. It received mixed reviews in the white press, but the in the black press and among prestigious colleagues it was lauded as an “artistic achievement” by, among others, Richard Wright in Paris, and Langston Hughes in the Chicago Defender. A year later in 1950 Brooks was awarded the Pulitzer Prize.

In the decades that followed Brooks became a leading African American academic and literary figure. She was part of the Black Arts Movement, her books of poetry continued to sell well, she was invited to lecture at colleges, and became a distinguished professor of poetry and literature, eventually receiving many doctorates.

As the demands of her professional life grew, Brooks’s marriage fell apart and she and Henry eventually divorced, but remained on good terms. But when Brooks invited Blakely to a family celebration, they rekindled their relationship and started to “date” again, going to poetry readings and conferences. Their affinity for poetry brought them together again, and Henry sought Brooks’ advice for his own writing. They traveled to Africa together, reconnecting with their cultural ancestry in what would be life-changing experiences.

In the U.S., Brooks became increasingly involved with the new generation of black civil rights activists. She wrote poems about the murders of Emmitt Till, Medgar Evers, and Malcolm X, as well as the entrenched racial injustices and inequities perpetrated against black America.

Her searing collection After Mecca, is named for the 176-unit apartment complex where Brooks’ family once lived. Jackson chronicles how Brooks did not write from isolation, but as very much a part of the African American diaspora in the U.S. and around the world.

The central poem conjures a gallery of characters that inhabit a huge Chicago housing complex described as the main figure searches for her lost daughter and encounters the lives and voices of her Mecca neighbors. Jackson observes it as “Gwendolyn’s most artistically revolutionary work. It follows no formal pattern.  . . . told in disjointed stanzas, just as the people in the Mecca dwell in a state of disjointedness.”

Brooks became one of America’s first poets to stylize and “perform” her work in the modern sense. Many of her poems are ignited by her sense of tonal drive and internal rhythms that make them dynamic performance pieces.

Jackson writes vigorously about Brooks’ mastery of classical and modern poetic structures and styles and her influence as an innovator. Jackson’s deft analysis of her poetry illuminates Brooks’ vision as an artist, activist, and leading poetic warrior in a perilous time.