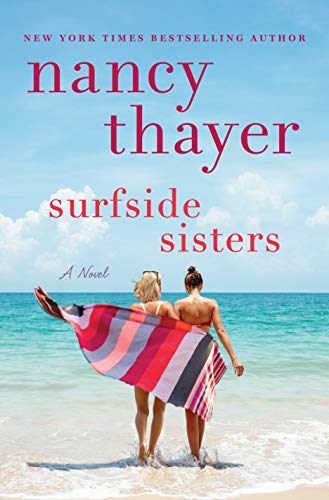 “Nancy Thayer, recognized for her enchanting beach reads, goes above and beyond with Surfside Sisters by offering a compelling and more spirited book than the usual summer novel.”

Nantucket Island holds allure for many for its mystery and romanticism of the sea, and also because many celebrities either have homes there or visit often. Keely Green and her folks, born and raised on the largest of the Massachusetts' islands, are far from being rich or famous; but this is home.

In preschool, Keely meets Isabelle Maxwell, and from the onset they are inseparable. Though Isabelle's family is wealthy, the two girls share much in common, and Keely loves being at Isabelle's beautiful, luxurious home by the ocean. As an only child with both parents who always work, Keely relishes the bustling with activity at the Maxwells’. Also, from a young age, she has been smitten with Isabelle's older brother, Sebastian, though she'd never reveal this to her friend.

The girls study hard in school with the ultimate dream of attending college and becoming novelists. Further education is not a problem for Isabelle whose parents can well afford her tuition to Smith, but Keely needs to and does receive a full scholarship to the University of Massachusetts at Amherst—happy, for the two schools are close by so they can maintain their friendship.

Keely enjoys her classes and is informed she has a promising future. Her professor advises her to apply to the prestigious Berkshire Writers' Colony, which has a three-year MFA program and would help advance her career. Unfortunately, during her junior year, Keely's dad passes away, and she must leave school.

Isabelle's attorney father prepared the will, and both Keely and her mom are astounded to learn they are almost destitute:

"Mr. Maxwell sighed. 'To be blunt, George had no savings. He wasn't able to leave you any money. He had no life insurance. You understand you had to borrow against the mortgage on the house to pay for the cremation expenses. You have a good job at the hospital, Eloise. You're senior staff. But after studying your finances, I have to advise you that alone, without George's income, you won't be able to make the mortgage payments. Or pay the homeowners' insurance or real estate taxes.'"

When Keely hesitantly suggests Mr. Maxwell could offer them a loan: "His face was stone. 'I suggest you forget that idea. Loaning money to friends only leads to trouble. I always advise against it.'"

This man, who welcomed her into his family and treated her like another daughter recommends she drops out of school to help her mother with the bills. Keely is brokenhearted, but does not let this detain her from fastidiously pursuing her writing. She soon is offered a lucrative contract for her first book.

Her closeness with Isabelle starts to breaks down. Though Isabelle has everything anyone could want, she is envious for not being the first to be published. Keely moves to New York City where she schmoozes with her editor as a now bestselling author and attends enchanting parties. She starts dating Gray Anderpohl, a wealthy pediatric surgeon who adores her, though she does not return his affection—not enough to plan a life with him.

The frenetic life in the city soon wears on Keely, as is shown in her newest book. When she learns her mother is deeply depressed after retiring from her nursing job, Keely returns home, hoping the appeal of the salty air will whet her creative juices.

Meanwhile, Isabella calls Keely to report she is now "hopeless in love" with a man named Gordon Whitehead. Soon after coming home, Keely begins a relationship with Tommy Fitzgerald, a charismatic, middle-class man whom Isabelle adored in high school. But Keely does not believe she is infringing on Isabelle's "property" seeing she is with Gordon.

The first quarter of this book reads like a young adult novel as it basically embraces the lives of the girls as they grow up. Somewhat dragged out, it does set the stage for what is to follow, which flows nicely, to the point where it becomes an exciting, stimulating page-turner.

Filled with angst and high emotion, Keely presents an empathetic facade of forgiveness for problems that occur between her and Isabelle, especially in instances where many would feel Isabelle acts spoiled and vindictive. Nancy Thayer, recognized for her enchanting beach reads, goes above and beyond with Surfside Sisters by offering a compelling and more spirited book than the usual summer novel.