Supreme Power: 7 Pivotal Supreme Court Decisions That Had a Major Impact on America 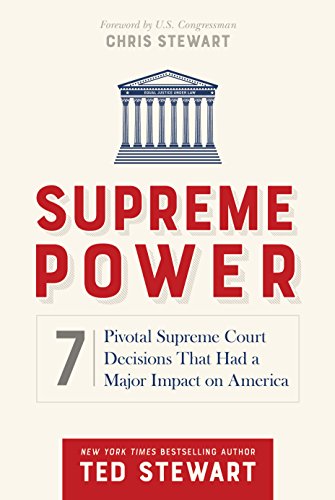 “Ted Stewart has his own set of religious and societal values, and he explains them well as part of his tirade against the current Supreme Court. He would return our country to the way it was 60 years ago before the Warren Court began to elaborate on the rights of Americans.”

Lawyers, doctors and other professionals have a language of their own. Lawyers, for example, use Latin phrases when plain English might suffice.  Doctors know the technical names for diseases and symptoms and talk to their patients as if everyone understood their terminology. We rely on these professionals for our legal and medical health even if we can’t understand them.

Federal District Court Judge Ted Stewart takes a step in the right direction with his new book about seven Supreme Court decisions. If anything, he may step too far in the direction of making his survey of judicial landmarks accessible to the average reader.

His scrutiny of the cases, as might be expected, is molded by his own judicial philosophy, which is decidedly conservative. Supreme Power: 7 Pivotal Supreme Court Decisions That Had a Major Impact on America offers the lay reader a partisan, but interesting, introduction to the role of the Supreme Court in the American system. As a general matter, the author is not pleased with what he sees as the illegitimate performance of the Third Branch of government.

Judge Stewart’s choice of his “seven pivotal decisions” seems appropriate. His discussion of the actual cases, however, is quite shallow. Most first-year law students would be called upon to do a better job of reasoning. Judge Stewart has a different focus, however. He wants to place these cases in social and historical context, and some of the best writing in the book presents the background of the disputes that came to the Supreme Court for resolution. His writing on Plessy v. Ferguson and the Nation’s descent into apartheid is skillful and noteworthy. Similarly, his discussion of the origins of judicial review of Congressional legislation is admirable.

In his fourth chapter, Judge Stewart bemoans the ascendancy of federal power over states’ rights through the vehicle of the Commerce Clause of the Constitution. The Supreme Court’s contorted reading of federalism had almost tipped the American economy into the chaos experienced around the world during the Great Depression. Judge Stewart does not fully appreciate that a revision of Supreme Court doctrine saved the country.

In his fifth chapter, Judge Stewart drops all restraint, offering an unabashed promotion of a national policy that would intertwine government and religion. He argues that the Founders could not have intended a “wall of separation” between church and state because, on occasion, they made reference to the importance of organized religion. Academic scholars have done a much better job assessing the place of the church in Colonial America, and Judge Stewart adds nothing to the debate except an earnest plea that we return to our Christian origins.

By the time he reaches his sixth case, Judge Stewart discards all constraints on portraying his views as neutral. He bemoans the efforts of his fellow district court judges to redress constitutional violations. Apparently, countenancing blatant violations of rights would be his preferred strategy.

Finally, Judge Stewart attacks the Supreme Court’s role in recognizing individual rights that reflect issues of societal values and culture. If his personal views were followed, all would be right. If the Court adopts a contrary point of view, he condemns the ruling as merely the misguided work of five justices out of the nine who make up the Court.

Ted Stewart has his own set of religious and societal values, and he explains them well as part of his tirade against the current Supreme Court. He would return our country to the way it was 60 years ago before the Warren Court began to elaborate on the rights of Americans. Were we better off in those days before the Civil Rights Movement? Before women could achieve heights previously limited to men? When ten percent of our population was oppressed for their sexual orientation? If you want to make America “great again,” don’t say it is because it was better back then. It favored you, and you would like that unearned preference returned to its rightful owner.