Supreme Justice: A Novel of Suspense 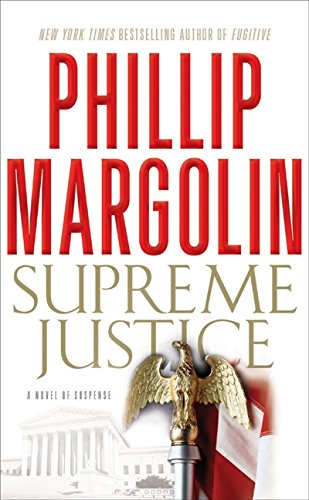 Supreme Justice is a novel of suspense with plenty of characters and more than a few plot twists and turns. The first several chapters drew me in like a bee to a bloom—plenty of action and suspense, enough to cause me to dial myself deeply into the story. However, the next couple of chapters were somewhat of a letdown after all of the action in the beginning, and I had to plod through them. Thankfully, Margolin snapped me back in shortly thereafter.

The book is a follow up to his successful novel, Executive Privilege. In fact, he reprises several of his popular characters from Privilege, and gives them another prominent role in Justice. I’m glad; Brad Miller, Dana Cutler, and Keith Evans are strong, believable characters that make the story credible and interesting.

As one might guess, the novel takes place in Washington, D.C., the main venue being the Supreme Court. The attempted murder of one of the Justices drives the plot. The author does a fine job of giving the reader an inside look at the highest court in the land. In preparation for writing the story, he read several books about the institution, and was given a personal tour of the building by the clerk of the Court. Margolin’s descriptions of the inner sanctum, conference rooms, and in particular, the clerks’ offices and duties, are spot on. The fact that the author actually argued a case at the Supreme Court makes the story all the more believable.

Although not a courtroom drama, there are several realistic scenes involving trials and conferences. Most of the action takes place outside of the Court. We meet Sarah Woodruff, who used to be a police officer, but winds up on death row in an Oregon prison for the murder of her boyfriend, John Finley.

Finley is a nefarious rogue with plenty of skeletons in his closet, and more than his share of enemies. Woodruff, after checking on her new paramour’s background, decides to dump him when she is unable to find any information about his past. Unfortunately, circumstances beyond her control tie her forever to Finley, and she is eventually convicted of his murder. Her attorney subsequently appeals her case to the Supreme Court.

The CIA, FBI, Homeland Security, and a couple of small-town police departments all play a role in this complex tale. We see a glimpse of the power brokering that goes on behind the scenes inside the beltway, as well as the outright lies and underhanded behavior that seem to be commonplace in the world of politics and national security. The intelligence community cannot afford to have the Court hear the Woodruff case, and will stop at nothing to ensure it never appears on the docket.

Margolin spins an interesting, action-packed drama that keeps the reader on their toes. Just when one thinks they’ve figured out the ending, the author throws in another twist. He had me fooled at the end. I enjoyed reading Supreme Justice; I think you will, too.