Superpower?: The Amazing Race Between China's Hare and India's Tortoise 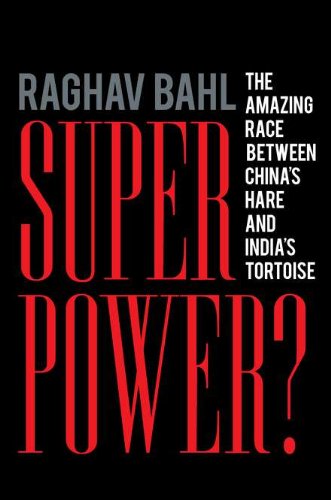 India and China are justifiably two of the world’s emerging super powers whose prestige was most recently demonstrated both by President Obama’s state visit to India looking for opportunities to increase trade between India and the US (11.7.10 to 11.10.10), as well as the ongoing U.S. tête–à–tête with China regarding that country’s economic and military power.

Raghav Bahl, the Managing Director of Network 18, India’s largest television news network, brings great resources to bear in his analysis of why the race between China (the Hare), and India (the Tortoise) is important, with particular reference to describing the attributes of both countries as well as the implications for their rivalry over the next half century.

Who does Bahl believe is going to win this race, and what are the implications for the U.S. in particular and the rest of the world in general?

Bahl’s analysis is superb with respect to his sophisticated evaluation of the economic and political characteristics of both countries. He posits that in the short term China has the greatest advantages owing both to its manufacturing base, as well as its ability through the medium of large cash surpluses, to bargain both persuasively and effectively with respect to mergers and acquisitions outside of China as well as its capacity through a planned economy to create and implement effective five year plans.

Having said that there is a downside to the Chinese miracle as well. The Chinese have exploited the global consumer-led economic demand surge by focusing on investments and exports. As Dahl notes: “This has made it vulnerable to the fortunes of non-Chinese consumers.” He observes that the Chinese expansion has come at the expense of civil liberties most recently exemplified by their reaction to the awarding of the Nobel prize to the Chinese dissident and scholar Liu Xiaobo. Finally, the other compelling factor for preservation of the Chinese miracle is the advancing age of their population.

India, as Dahl argues, also brings great resources to bear in this race, but they are perceived at this point to play second fiddle in their mutual competition to, at this point, to the overwhelming prestige and power of China. India’s strengths relate to its vibrant democracy, the world’s largest, as well as the ability of its robust entrepreneurial classes to develop and implement innovative solutions to global business opportunities using English as their lingua franca. This is further complemented by the relative youth of India’s population.

Where India is disadvantaged in, at least the medium term, is in their paucity of modern infrastructure, as was evidenced by the difficulties relating to the 2010 Commonwealth Games (10.3.10 to 10.14.10); and their ongoing rivalry with Pakistan. Further constraints on India’s economic competitiveness also include the prevalence of internal armed insurrections that continue to spring up within India proper.

Why is this book important, and what are the implications for the rest of the world regarding both the race between the Chinese Hare and the Indian Tortoise, and the ability of the U.S. to steer an advantageous course with respect to both of these competitors?

First, Mr. Bahl exhibits an exquisite sensibility and intimate sense regarding the attributes and flaws of both of these countries. Though he is an Indian patriot, he is also, through the benefit of a fine analytical mind, able to analyze in some detail the policy implications of Chinese strengths and weaknesses.

He is quick to note that China, owing to the ability of its leaders such as President Hu Jintao, and Prime Minister Wen Jiabao to effectively use their authority through the auspices of a planned economy to make the hard decisions regarding infrastructure and energy that will create certain advantages in their competition with India over the short and medium term (for at least the next 20 years). Bahl argues that the Chinese face a potential pivot point in 20 years owing to the rapid aging of the Chinese population, and the pressures brought about by domestic Chinese consumers and ethnic factions which may impact their global competitiveness.

Bahl believes India’s advantages relate primarily to the fact that it is a democracy, and that English is the official language of the Indian government and commerce. Bahl describes India as being a tortoise whose greatest strengths rely in its ability to persevere for the long haul.

However, there are a series of compounding and potentially escalating implications for India as well. Can they continue to feed their population as well as bring more and more of their populace into the middle class while overcoming infrastructure difficulties? Will India be able to capitalize on its business process re-engineering capabilities to make them an effective global player for the remainder of this century and beyond?

Both of these countries have compelling advantages and disadvantages as they continue to emerge on the world stage. Raghav Bahl has provided us with the benefit of his wisdom to further the process of analysis on how best to engage with both of these countries while at the same time helping to protect U.S. interests in are ongoing competition with both of these emerging global super powers. Superpower? is a must read for policy makers and forecasters of global economic trends.