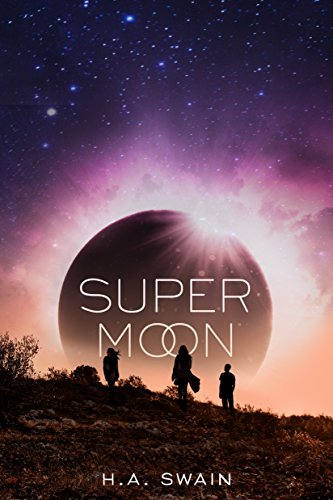 Two young women—one trying to escape her destiny on the moon, one trying to better her life on Earth—find romance and purpose in this low-stakes young adult sci fi novel.

Uma Jemison was born on Earth to poor parents. Determined that their daughter should have a chance at a better life they have her tested for, and eventually accepted into, an elite training academy on the moon. Uma must complete her schooling whereupon she may take a 28-day leave of absence, then must return to the moon to get her permanent work assignment.

Talitha Neva and her twin brother make ends meet on Earth by scavenging, impersonating, and hacking buy links on social media feeds. They’ve come a long way from scrawny, starving kids, and have made careers out of social media shaming elitist consumer culture.

As a complete narrative, it was unclear what this book was trying to accomplish. Likewise its theme seemed muddled. The front cover teaser reads “IS THEIR LOVE WRITTEN IN THE STARS?” yet the back blurb is only a first-person account of Uma’s distaste for a permanent work assignment.

The narrative is similarly disjointed. What appears to start as a young woman’s yearning for a freedom she has been denied soon mutates into an over-the-top diatribe on consumerism. The initial through line—Uma getting to go back to Earth for Sol—was weak motivation at best and was thwarted early on in the book, leaving the reader with no real direction.

Across the board the characters were problematic. Uma and Talitha have no distinct voices, instead blending into fundamentally the same character. Chapters where the two interact are painstaking to read, as dialogue tags must be followed diligently to discern whose point of view one is in and who is speaking at any given time.

Due to the first person POV, the alternating chapters between Uma and Talitha could be just as easily read as two different timelines of the same character, so similar are the voices and lack of agency of the characters. Both whine about the unfairness of life. Both must be driven to action by their male counterparts. Both seek a change in life but are unwilling or unable to elicit that change for themselves.

The strongest character in the book is Talitha’s twin brother, the third POV (and also in first person). Although Castor’s page time is limited, it is he who drives the plot in the first one hundred pages and actually brings about events. As the plot meanders and fails to pick up any sort of steam, it is only Castor who manages to elicit reader empathy and interest.

Side characters as well lack any amount of depth and serve as poor plot devices. Particularly odorous is the young man who occasionally works with Talitha and Castor, who is known to be pursuing Talitha and in one scene, forcibly kisses her. Talitha, instead of raging or acting, allows the kiss although it bothers her, because it is just something she needs to do to win favor.

Outside of the characters and generalized voice the pacing of the book was painfully slow. A true through line never appears and the characters seem to wander sometimes tangentially to what would be a logical plot. The anti-consumerism message is heavy handed, most scenes lack any relevant tension, and the romance relies too heavily on “insta-love” tropes and the novelty of lesbian pairings.

Lackluster from the start and increasingly frustrating as it progresses, Supermoon is an easy miss, especially in a YA market currently producing some stellar science fiction and fantasy. Three first person POVs, lack of any character three dimensionality, a weak, sometimes invisible plot, and poor agency mark this book as more of wandering first draft than a polished work of science fiction.