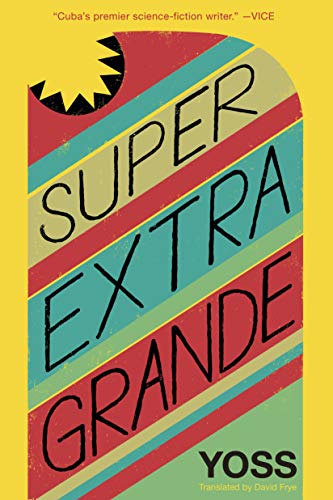 “. . . . joyous and raunchy . . . Yoss creates a fascinating and beautiful universe built upon the ideals of cooperation and egalitarianism.”

Dr. Jan Amos Sangan Dongo is a veterinarian who specializes in very large organisms. In Super Extra Grande, the Cuban science fiction author Yoss chronicles Dr. Jan Sangan, “Veterinarian of the Giants,” in his adventures across the galaxy. The short novel is by turns digressive, bawdy, and erudite.

The human Dr. Sangan has a veterinary assistant Narbuk, an abrasive alien who speaks in Spanglish. His other staff includes two secretaries, Enti and An-Mhaly. Enti is a descendant of the Maasai, and An-Mhaly is a Cetian. Sangan describes the Cetian as having “yellow eyes with no visible pupils, skin that went purple to mauve when she got excited, a retractile spiny crest on the top of her head, a three-forked tongue in a toothless mouth that harbored one of the most complex and efficient mastication systems in the galaxy, and six plump mammary glands.” The description captures the spirit of Yoss’s style.

Yoss is the pen name for José Miguel Sánchez Gómez, a Cuban science fiction writer with credentials right out of Buckaroo Banzai. Besides being an author Mr. Gómez earned a degree in biology and is the lead singer to the heavy-metal band Tenaz. As the back cover states, he assumed the pen name Yoss in 1988.

Through the twists and turns of this delightful novel, Sangan is tasked with rescuing Enti and An-Mhaly from the bowels of a continent-sized amoeba-like alien. How Sangan finds himself in that situation is worth the read. It should also be noted that Sangan is human, albeit a bulky giant. His physique and appearance would resemble Shrek’s or Andre the Giant’s. In the novel, he recounts how his height and massive weight cause numerous misadventures. The son of two competitive academics, he doesn’t want to follow their footsteps, but uses their connections to study biology and zoology.

Ably translated by David Frye, Super Extra Grande manages to effortlessly move between Sangan’s academic descriptions of alien fauna to slangy everyday speech. Of special note is Narbuk’s Spanglish. This futuristic bastardized tongue can be challenging at times, but is enjoyable to parse in much the same way Anthony Burgess threw together Cockney and Russian in Clockwork Orange. Some representative Spanglish is: “Go on, olvídate about it, solamente demand they give us a biological decontamination tent ahora. I don’t even quiero to find out qué this suit smells like en el outside. Supongo que they’ll incinerate it instead of putting it back.” Confusing at first, but much can be revealed through context clues.

True to his Cuban heritage, the book has an interplanetary government based on the cooperation of seven sentient races. It seems like a rational response from a writer who lives in the shadow of the United States and its constant meddling in international affairs. The sentient races cooperating also reveals much, since the future history isn’t about conquest and domination. There are conflicts and diplomatic squabbles, but Super Extra Grande is a comic picaresque, not military science fiction.

The novel includes a digression about how a Spanish-speaker invented a faster-than-light technology. But unlike other large canvas space operas, faster-than-light travel is impossible, but not faster-than-light communication. It is an ingenious, although not implausible, twist on the trope. Communication is only as fast as the spaceship carrying the mail. Cuba, much like Canada, is a hidden repository of quality science fiction storytelling.

Super Extra Grande is a joyous and raunchy reading experience. Never mean-spirited or petty, Yoss creates a fascinating and beautiful universe built upon the ideals of cooperation and egalitarianism.