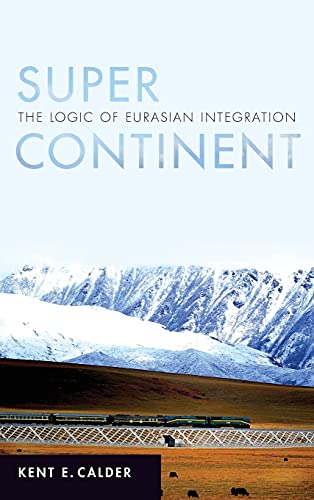 Super Continent: The Logic of Eurasian Integration by Johns Hopkins University professor Kent E. Calder, points to a basically harmonious future in which material interdependence will generate mutual gain from Bangkok to Glasgow. China will again become the Middle Kingdom as its Belt and Road Initiative drives and sustains this movement toward peace and prosperity.

Calder argues that an evolving “continentalism” is superseding the Atlanticism of the past seven decades. He acknowledges many risks and uncertainties in this venture. Still, he writes that the underlying geography and resource endowments of Eurasia give the continent a  long-term potential for prominence in world affairs as a coherent unit.

While Western Europe and North America have long enjoyed natural gas pipeline grids, rail networks, and cross-border power lines, such unifying factors are just now taking shape in Eurasia. Infrastructure investment is transforming the continent’s political and economic life. Deregulation in logistics is making freight-forwarding cheaper and faster across Eurasia. China and Russia are finding common ground not just in opposing the U.S. hegemony but in energy distribution. The European Union and the Middle East are cooperating in developing ties across the old Silk Road.

Calder’s case is strongly argued and supported by 25 graphics—figures, maps, and tables—showing many kinds of supporting evidence ranging from Chinese investments in Europe to China’s domination of overland routes westward to the country’s multiple pipeline options.

All this generates prospects for a major transformation—what Calder calls a “Crossover Point”—from the previous open liberal order to new forms of global governance and political economy. This system change is driven by the rise of China and by developments in energy, logistics, finance, and globalism. The argument parallels that by Peter Frankopan in The New Silk Roads: The Present and Future of the World (2019). Calder says that the hegemony of one superpower is passé and could be replaced by co-hegemony or governance by multiple powers.

What could go wrong with Calder’s forecast? China’s economic engine may stall and fail to deliver. Many existing problems may become more acute—excessive centralization, an aging population, water shortages, food deficits. As Calder points out, resources are failing to meet the demands of increasing populations over much of Asia. The Eurasian continent, unlike America, lacks abundant arable land and relatively clean water. But as the United States and Brazil let their forests burn and as water levels fall, the Americas may lose their ability to make up slack in Asia.

Calder’s super-continent scenario recalls the high hopes in the late 19th early 20th century that the long peace that commenced in 1815 would endure and bring rising prosperity from the British Isles to the Balkans. This optimism, experience showed, failed to take account of fears and rivalries that drove arms racing and competition for hegemony in Europe and control of distant markets. It failed also to acknowledge the myopia and greed of top political leaders such as Kaiser Wilhelm II and Tsar Nicholas II, whose decisions were also shaped by belligerent military and foreign policy advisers.

Basically Calder agrees with Marx that the material base determines the superstructure. But this view does not take account of how intangibles—culture, nationalism, and individual personalities—can act as independent agents in political and economic life.

Does Calder really expect that the unique and proud features of Japan and Kazakhstan will evaporate in the face of cross-continental railways? Will leaders like Shinzo Abe and Nursultan Nazarbayev repress their personal ambitions to join an incipient continentalism? Even today, Europe’s unity teeters on cultural and linguistic divides far shallower than those that crisscross the potential super continent.

Is multiparty governance feasible? History gives a muddled answer. The Concert of Europe may have contributed to Europe’s century of relative peace, but it allowed the Crimean War and the wars that produced a unified Germany in 1871; later it allowed the Balkan Wars and the Guns of August 1914. The bipolar condominium of the United States and USSR did not give war to Armageddon, but it came close—in 1962, 1973, and 1982–83.

Graham Allison, citing Thucydides, warns that the rise of one great power challenging the existing hegemon can spark a war for ultimate supremacy. Both logic and history suggest that peace is better maintained by an unchallenged hegemon who sets the rules by which all can play and optimize (not maximize) their interests. If the leaders of the hegemon forget or ignore past experience, if they proceed to abuse their power (as did George W. Bush in invading Iraq), or fail to enlist support for their policies (like Donald Trump), not order but chaos follows.

Calder notes that Xi Jinping had tied to foster a new connectivity across borders and in many spheres, for example, the work of the Asian Infrastructure Investment Bank. But is Xi’s espousal of distributive globalism any more reassuring than the hifalutin words of some American leaders? And if China’s actions contradict its preaching, as in seizing the South China Sea or in Uighur cultural genocide, who will trust its promises?

Will China unite or divide the world? Professor Calder expects unity—at least on the super continent. A cautious political realist would anticipate more division than harmony. None of us possesses a crystal ball. But Super Continent provides meaningful facts and ideas for assessing alternative futures in world affairs.