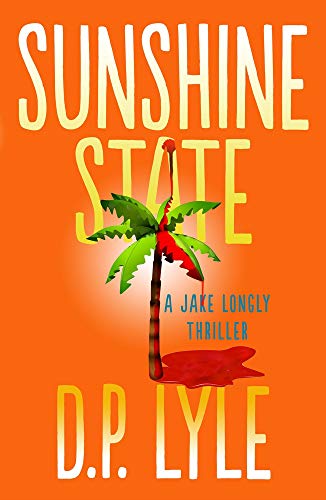 “With plenty of local color in the Florida settings and an abundance of quirky small-town characters, this mystery will whet the reading appetite for more of the same from author D. P. Lyle.”

Sometimes it pays to have a girlfriend whose uncle owns a movie production company.

At least Jake Longly, ex-Texas Rangers pitcher turned PI thinks so, especially when it pertains to his latest case. Seems serial killer Billy Wayne Baker, currently serving seven life sentences at Union Correctional Institute, has hired Jake and his dad to prove he’s innocent of two of the crimes of which he’s been found guilty.

“That makes no sense,” I said. “He wants us to prove he didn’t kill two of the people he confessed to killing? What? Five life sentences is better than seven?”

Also, Billy Wayne won’t tell them which two victims he didn’t kill. Part of the deal with the DA: if he renegs on any of his confession, he’ll face a worst sentence than life imprisonment seven times over.

“I confessed to all seven killings but the truth is two of them weren’t mine. I expect you to figure out which ones and prove it wasn’t me.”

“Can I ask which ones you deny doing?”

“Didn’t I just say that’s what you’re supposed to figure out?”

With this puzzle before them, Jake, Ray, and the lovely Nicole set out for Pine Key to begin their investigation.

“It doesn’t make sense that two staged killings took place in separate locations. Everything comes together in Pine Key.”

Come together, it does, slowly but surely as the group, pretending to be location scouts for a documentary on the murders interview friends, relatives, and witnesses. Nicole’s Uncle Charles again comes through for them. Thanks to Nicole’s fast talking, he decides to actually do the documentary after the case is solved, so they can kill two birds with that single piece of rock, find the killer, and get him all the info he needs.

“The documentary will be called Aftermath. Each will focus on a different community, a different killer. Murders in a big metropolis rarely make a blip. Their effect on small towns are catastrophic.”

Interesting facts come to light, as well as some contradictory information, conveniently overlooked during the previous investigation. The husband of one victim is a police officer who had access to all the evidence and could’ve done a little tampering after he killed his wife. He even assisted in the investigation. Trouble is, it looks as if he’s truly grief-stricken about his loss and is a likable guy besides.

Someone else isn’t so likable, however, and he doesn’t appreciate the fact that Jake is reopening the can of worms he thought he’d successfully buried. With the focus off Billy Wayne and a group of movie people nosing around asking questions where they shouldn’t, it won’t be long before another victim may turn up, and it could be one of Jake’s crew.

Sunshine State is an interesting mystery told with plenty of irreverent wisecracks on Jake’s part and more than a little sarcastic humor. Readers will enjoy this one. With its unique “guessing game” plot, they’ll be scurrying to look up others in the series as well.

With plenty of local color in the Florida settings and an abundance of quirky small-town characters, this mystery will whet the reading appetite for more of the same from author D. P. Lyle.